Bulgarian President to 'Fight' for All Austrian Investments 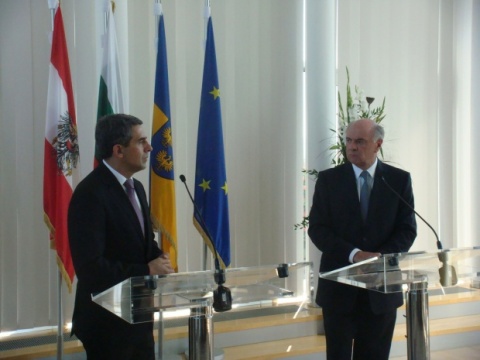 Bulgarian President, Rosen Plevneliev, vowed Monday to work for all likely investments from Austria regardless of how big or small.

Plevneliev, who is on an official trip to Austria, spoke during his meeting with the Prime Minister of Lower Austria, Erwin Proll.

This is the fifth meeting between the two, and the second since Plevneliev was sworn as President.

The meeting was the first item on the agenda of the two-day trip.

During the talks, the President stressed Bulgaria has its self-esteem, along with an improving business climate and competitiveness, being the European champion of low debt, enjoying trust from global markets, and planning a budget deficit under 1% by the end of 2012.

Plevneliev highlighted the fact Austria is the second largest investor in Bulgaria after the Netherlands with a total investment of nearly EUR 6 B and a fivefold increase in bilateral trade in the last 10 years. He voiced hope of another fivefold raise by 2020 and designated the top areas of cooperation as the energy sector with energy efficiency and diversification, farming, food manufacturing, infrastructure and tourism.

On his part, Proll noted Bulgaria is a stable economic partner, desirable by investors, demonstrating dynamics in its economic development, which is beneficial for the business in Lower Austria.

He explained that in recent years over 450 companies from Lower Austria have made investments in Bulgaria, while just in 2012 their number has reached 50. He paid special attention to the power utility EVN investment in the country, praising Plevneliev and Prime Minister, Boyko Borisov, as reliable partners of EVN.

In addition to EVN, other topics included economic partnership, the Danube strategy, and the "Gorna Arda" joint hydro project of EVN and the National Electric Company, NEK.

The two agreed on deepening cooperation in the Danube strategy with Proll voicing conviction the Danube area will become more and more important for the entire continent with its 100 million population and strong economic potential.

A summit of the government leaders of Danube countries will be held in Lower Austria in October to discuss the building and enlargement of infrastructure in the region, ties in the sectors of tourism and culture, while another conference in 2013 will examine possibilities for stronger cooperation between Danube and Black Sea ports, the Bulgarian online news site Dnevnik reports.

Plevneliev informed the Gorna Arda project is progressing on time and on schedule, adding all construction permits and schedules should be finished by the start of 2014 and praising EVN as a great strategic partner. The investment amount is EUR 400 M.

Proll confirmed the preliminary stage of the project is advancing on time.

The Bulgarian President stated Bulgaria counts on Austria for support for using EU cohesion funds for underdeveloped EU regions and for the country's accession of the Schengen zone.

An Austrian-Bulgarian business forum will take place in the Austrian Chamber of Commerce. The forum will be attended by Bulgarian Transport Minister, Ivaylo Moskovski, and Regional Development Minister, Lilyana Pavlova.