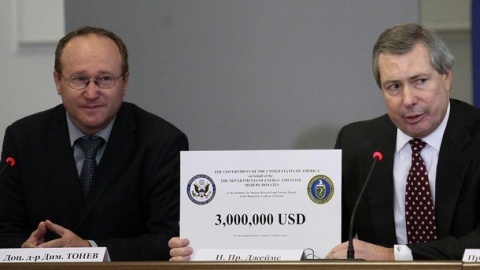 Dimitar Tonev, Director of the Nuclear Institute at BAS (l) and outgoing US Ambassador in Sofia, James Warlick (r) during the donation ceremony. Photo by BGNES

The Nuclear Institute at the Bulgarian Academy of Sciences, BAS, received Thursday a rare for BAS donation of BGN 5 M.

Of them BGN 3 M were given by the US by the outgoing US Ambassador in Sofia, James Warlick, while the other BGN 2 M came from the Kozloduy Nuclear Power Plant, NPP, and were presented to the Institute's Director, Dimitar Tonev, by Prime Minister, Boyko Borisov.

The money will be used for the purchase of special equipment and the establishment of a national center for cancer diagnostics and cure, and for training the Kozloduy employees.

Tonev stressed this is the largest scientific project in Bulgaria in the last 20 years.

Warlick voiced satisfaction that the donation is the culmination of his stay in Bulgaria and the best thing he could have done on his last workday in the country.

The PM explained that currently isotopes come on planes from Hungary and during the flight their strength diminishes. The new cyclotron, to be purchased with the funds, will make possible their production in Bulgaria, leading to more diagnostics and savings of BGN 10 M a year.

On Tonev's statement that the first isotopes will be made in 2015 over the public tender procedure, he replied that the latter could be shortened by six months.

Borisov addressed Warlick, saying the donation is a fine way to make a good and memorable impression in the minds of Bulgarians. He expressed once again condolences for the murder of the US Ambassador in Benghazi.