Bulgaria Proposes to Israel Monuments of Rescue of Bulgarian Jews 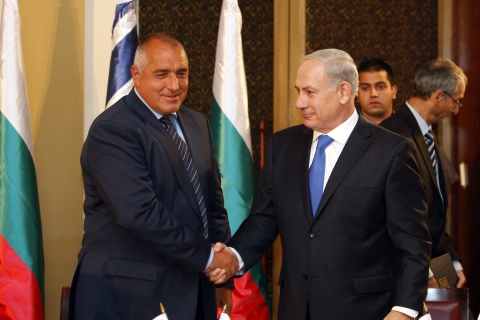 Bulgarian Prime Minister Boyko Borisov has proposed that Bulgaria and Isreal should erect monuments dedicated to the 70th anniversary since the rescue of Bulgarian Jews from the Nazi Holocaust death camps in World War II.

Borisov spoke after Tuesday's joint sitting of the Bulgarian and Israeli Cabinets in Israel's Jerusalem, the second since 2011.

He said he hoped Israel would join Bulgaria in seeking to commemorate the heroism of the Bulgarians who prevented the deportation of Bulgaria's almost 50 000 Jews to the death camps of the Nazi Holocaust in 1943 even though back then Bulgaria was technically allied to Hitler's Nazi Germany.

"There are circles around the world attempting to distort, interpret, comment on history. But Bulgaria is a nation that saved all of its Jews under Hitler, and that was thanks to the entire Bulgarian nation," the Bulgarian Prime Minister declared in Jerusalem, as cited by Focus.

He did thank his Israeli counterpart Benjamin Netanyahu for praising the rescue of the Bulgarian Jews during World War II.

"Next year we are celebrating the 70th anniversary since the rescue of the Bulgarian Jews, and I am convinced that Prime Minister Netanyahu and I will do what it takes to erect monuments in Bulgaria and Israel in order to honor this act of the Bulgarian nation which did something unfathomable back them," he added.

According to Borisov, it is easy to interpret history today but back in 1943 it was very hard to defy Hitler and to save one's closest family and friends.

"If you hadn't saved them back then, their children and grandchildren wouldn't be here today," is how Borisov quoted representatives of the descendants of the Bulgarian Jews as saying.

"I rely a lot on the personal support of Prime Minister Netanyahu; we will do make sure that what was done back then will be appreciated," the Bulgarian PM concluded.