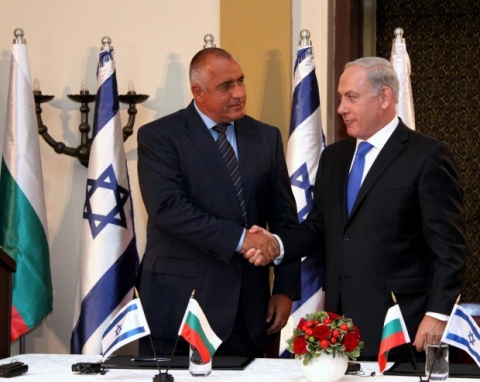 Bulgaria has reiterated its stance on the July 18 bus bombing in Burgas, still refusing to blame it on Hezbollah, as it says it does not have evidence to support the claim.

On Tuesday, a delegation headed by Bulgarian Prime Minister Boyko Borisov and 12 Bulgarian ministers arrived in Israel for the two countries' second joint cabinet sitting. As expected, the two countries' officials commented on the recent terror attack on Bulgarian soil that killed five Israeli tourists and a Bulgarian bus driver.

Israeli PM Benyamin Netanyahu once again declared that his country has solid evidence pointing to Hezbollah.

However, his Bulgarian counterpart said Bulgaria does not possess enough information to determine who is responsible.

"We are working in close collaboration with the US, Israel, Great Britain and all intelligence services, so that we can gather conclusive data," Borisov stated.

He declared that Bulgaria would condemn any terrorist and any country that produces terrorists, as long as it has sufficient evidence.

In the aftermath of the July 18 Burgas bus bombing, Israel tried to convince the EU to designate the Lebanese-based Hezbollah group as a terror entity, but to no avail.

The United States classifies Hezbollah as a terrorist organization.