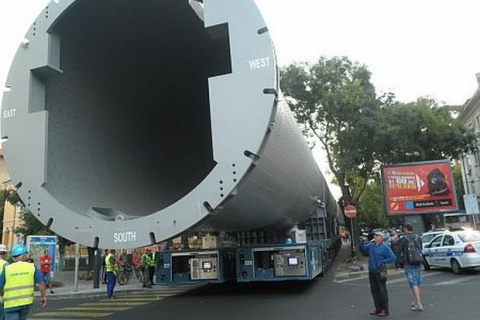 The giant fuel reactor for the Lukoil Neftochim refinery is the heaviest load ever passing through Bulgaria. Photo by DarikNews

The giant fuel reactor for the Lukoil Neftochim refinery has successfully reached the facility Saturday evening after being transported for two days in Bulgaria's Black Sea city of Burgas.

In addition of turning into an attraction for local residents and visitors, the 57-m long, 9-m tall reactor weighing 1 656 metric tons has inflicted serious damage to the city's streets.

The equipment, moving at just 1-5 km/h, took over 38 hours to reach its destination. It is to be mounted at a new facility under construction in Neftochim.

It was placed on a platform with 240 wheels and an elaborate balancing system. Traffic on the reactor's route came to standstill after police closed the streets gradually for several hours at the time. All obstacles were removed in advance.

This is the heaviest load ever passing through Bulgaria and the whole adventure is filmed by a Discovery Channel team for a feature in the Mega Structures series.

On September 15, a second similar reactor is expected to make its presence in Burgas.

After that a committee will assess the damage inflicted on local infrastructure. The logistics company has made a security deposit of BGN 0.5.

The two reactors arrived by sea on a special ship. The transportation of the first one began at 6 am Friday.