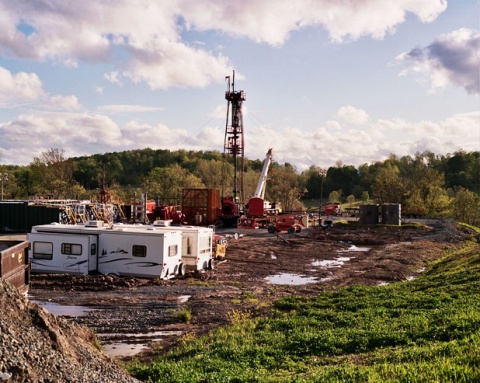 A new report for the European Union warns that tough new regulations are required for the shale gas industry because of the high risk it poses to human health and the environment.

The EC study, 'Impacts of shale gas and shale oil extraction on the environment and human health', the most comprehensive analysis yet of the shale gas sector, says that drilling for shale gas poses a "high risks", worse than those posed by other fossil fuels, EEM reported.

Amongst these is water contamination caused by the hydraulic fracturing of rocks to obtain the gas, known as 'fracking'. The report warns that no fracking should be allowed in areas where water is being used to drinking purposes.

Seven other risks are highlighted, including contamination and depletion of ground and surface water, degradation of biodiversity, land, air quality and the danger of earthquakes.

It also speculates as to whether the use of toxic chemicals for injection should be banned in general. At least, it says, "all chemicals to be used should be disclosed publicly, the number of allowed chemicals should be restricted, and their use should be monitored".

It notes that fracturing fluids contain heavy metals and radioactive materials, and that in the US many accidents have happened which have harmed the environment and human health. There, recorded violations of legal regulations amount to up to 2% all drilling permits, a very high level.

There has been groundwater contamination by methane and potassium fluoride, leading to salinisation of drinking water in the vicinity of wells.

There also needs to be better monitoring of shale gas extraction and "a thorough cost/benefit analysis" as part of a life cycle analysis, to assess the overall benefits for society and its citizens.

All of this is because the technology is novel and the consequences heavily dependent upon particularities of the local geology in each case. This makes regulation a complex issue.

So-called 'fugitive' methane emissions from hydraulic fracturing, where the gas escapes into the rock and water as part of the extraction process, later to be released into the atmosphere, can also be high and have a huge impact on the greenhouse gas balance.

There have been no studies done yet on methane intrusion into aquifers and in different instances these emissions might vary by up to "a factor of ten", the report notes.

This means that emissions of greenhouse gases from shale gas extraction, relative to its energy content, can be either "as low as those of conventional gas transported over long distances, or as high as those of hard coal over the entire life cycle from extraction to combustion", the report observes.

It concludes that "the present privileges of oil and gas exploration and extraction should be reassessed in view of the fact that the environmental risks and burdens are not compensated for by a corresponding potential benefit as the specific gas production is very low."

Earlier this year, Fatih Birol, the IEA's chief economist, warned that any energy strategy involving shale gas would be 'not the optimum path' for the environment or climate change.

Germany is already considering tighter regulation of fracking that occurs near water reservoirs and set to require developers to conduct environmental impact studies, according to a new report commissioned by the German Environment Ministry.

The EU study is one of five due to be released today, and identifies loopholes, gaps, scientific uncertainties and regulatory gaps in current EU regulation relevant to the industry.

As an example, the Urban Waste Water Directive does not allow the injection of pollutants into groundwater reserves. The authors of the report observe that this is likely to occur in shale wells.

Fracking could also fall foul of the Mining Waste Directive, which covers 'flowback fluids', or liquid containing toxic chemicals that flow into geological strata and could reach the surface. These are an inevitable part of the fracking process.

The new EU study recommends that environmental impact assessments should be made mandatory for proposed shale gas operations. As it stands, the Environmental Impact Assessment Directive does not cover this new sector, and only applies to facilities which extract over 500,000 cubic metres of gas per day, well over what shale wells produce.

Back in May, the new environment secretary, Owen Paterson, told the Cabinet that it should fast-track shale gas exploitation. He is also in favour of deregulation.

The next step is for an expert forum to address this question in December, ahead of consideration by the European Parliament.

Another report being prepared for the European Parliament and due to be published later this month, also reportedly recommends "a thorough analysis of the EU regulatory framework regarding specifically UFF [unconventional fossil fuels] exploration and exploitation", and calls on the Commission "to propose, as soon as possible ... appropriate measures, including legislative [ones], if necessary".

Fierce lobbying is said to be going on behind the scenes over the exact wording of this report.

MEP Claude Turmes, vice-chair of the Green Party in the European Parliament, said that, "without any new legislation, there is no adequate framework to protect citizens and the environment from shale gas. We need the European Commission to work on this".

A further report prepared by the industry committee earlier this summer also agrees that large-scale shale gas extraction "may require a comprehensive adaptation of all the EU's relevant existing legislation".

The European Commission now needs to decide on its position on this new source of energy. It can either prepare a new directive that covers, amend all existing legislation, this particular industry or offer "soft guidance", the least preferred option by environmentalists, although the one preferred by the Energy Directorate.

The Environment and Climate Directorates believe that more strict action needs to be taken, especially since the industry is prohibited in countries such as France and has been linked to earthquakes.

Gerben-Jan Gerbrandy, the Liberal vice-chair of the European Parliament's environment committee, said: "There are a lot of potential dangers to water, the environment and biodiversity that we seriously have to look into. I don't believe at this moment that a single directive for shale gas is the right approach."

Antoine Simon, shale gas campaigner for Friends of the Earth Europe said: "This report silences industry rhetoric - shale gas is undeniably a high-risk activity. It threatens the health of local communities, and the environment, while locking Europe into fossil fuel dependency. These risks are a clear sign that a moratorium on this toxic technology in Europe should be a priority for decision makers."

A report published earlier this year by Policy Exchange in the UK, Gas Works? Shale gas and its policy implications also called for effective regulation.