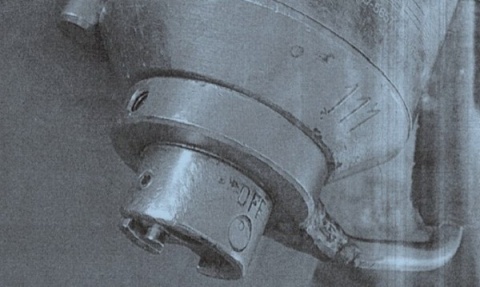 The stolen device. Photo by the Interior Ministry

Police in Sofia have found the potentially dangerous device containing a radioactive chemical that was stolen from a construction site.

The capsule of the device has not been broken and there is no danger for the population, the Bulgarian Interior Ministry reports Wednesday morning.

The Sofia Directorate of the Interior Ministry has received information about the location of the gamma-defectoscope about 8 pm Tuesday evening. A police team has been immediately dispatched to the address in the Sofia Geo Milev district.

After an expert examination, it has been established that the metal body is intact and no radiation has leaked. The device has been transported to a safe storing place and is guarded by the police.

The exact address where it was found and the ID of the thief have not been disclosed, but the main lead is that it was stolen by a homeless person.

The gamma-defectoscope's radioactive element has a radioactivity of 10 Curie and people could have been exposed to radiation in case of damage of the capsule.

The device, which was 25 x 10 cm in size and weighs about 5 kg, disappeared around 3 pm Monday from a construction site used by Sofia's Central Heating Utility and located on "Kosta Lulchev" street.