Obama to Go Ahead with US Missile Shield in Europe 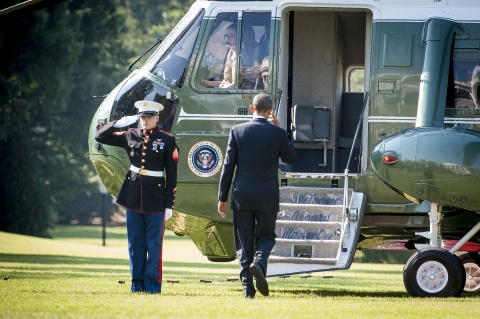 President Barack Obama boards Marine One on the South Lawn of the White House in Washington DC, USA, 31 August 2012. EPA/BGNES

US President Barack Obama believes Washington and Moscow can cooperate on a planned US-led missile shield in Europe, but is determined to move forward with the plans regardless of Russia's stance, according to the Democratic Party's 2012 national platform.

"The President is moving forward with a 'phased adaptive approach' to European ballistic-missile defense that will protect both Europe and the United States from missile threats emanating from Iran and elsewhere," says the Democratic platform for the November presidential election, in which Obama faces Republican nominee Mitt Romney.

"We believe that the United States and Russia can cooperate on missile defense, but we have also made clear that we will move forward with our system, beginning with the steps we have taken to deploy it in Poland, Turkey, and Romania."

Russian Foreign Minister Sergei Lavrov said last month a "unilateral buildup of missile capability" by the United States and other NATO members could lead to "the preservation of Cold War hangovers."

RIA Novosti reminds that talks between Russia and the United States on the missile defense project have deadlocked over Washington's reluctance to give Moscow legally-binding guarantees that the shield will not be used against it.

Russia has threatened a host of countermeasure to tackle the U.S. missile defense.

In June, Russian President Vladimir Putin said the "dispute" over the shield would drag on regardless of who won the US election.