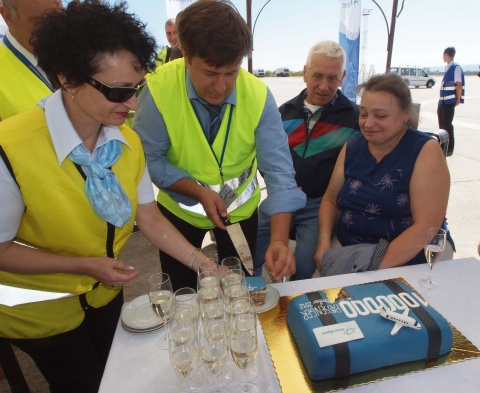 Larisa Nazarova from Moscow (right) became the 1000000th passenger of Varna Airport for 2012. Photo by BGNES

Lazarova arrived for a summer vacation in Varna with her family; the special surprise and award for her was a hand-made tapestry created by a master weaver, BGNES reported.

Egerler, who arrived on Germany Air flight, was taken to her hotel in the Sunny Beach resort with a limo.

The German doctor from the hospital in Magdeburg had already been on vacation in Bulgaria three times, visiting Sunny Beach and Golden Sands.

She first had a vacation in Bulgaria back in 1981; her 29-year-old son has also visited the Bulgarian Black Sea coast.