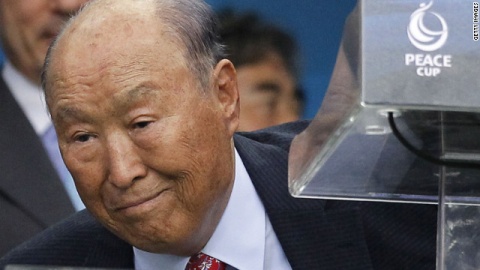 Moon set up the Church, whose members are often called Moonies, in the 1950s in the South Korean capital, Seoul.

He claimed to have millions of members, many in the US, but was accused of brainwashing and profiteering.

Moon died early on Monday at a hospital near his home in Gapyeong, north-east of Seoul, where the headquarters of his church is located.

He had been admitted to the hospital, which is owned by the Church, two weeks ago suffering from pneumonia.

The Church will hold a 13-day mourning period before his funeral on 15 September. Moon will be buried at Cheonseung Mountain, near his home.

"He was our father and God's messiah. His body was custom-made by God so we believed he would live until 100," his aide Bo Hi Pak told journalists.