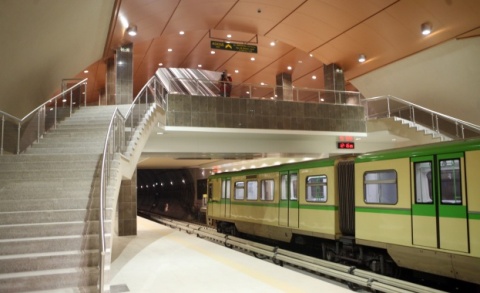 The second line of the subway in Sofia is officially launched Friday, August 31. Photo by BGNES

The President of the European Commission, Jose Manuel Barroso, is on an official trip to Bulgaria Friday for the opening ceremony of the second metro diameter in the capital Sofia.

The opening will be marked with celebrations and events for BGN thousands and a free ride on the second line for all who wish to do so after 2 pm.

Barroso arrived Thursday evening on the invitation of Prime Minister, Boyko Borisov. The two will be joined by President, Rosen Plevneliev, for the official launch of the second metro diameter of the capital's subway. The project is co-financed by Bulgaria and the EU Cohesion Funds and Transport and Regional Development Operational Programs.

The official ceremony will be further attended by the Ministers of Regional Development, Lilyana Pavlova, of EU funds, Tomislav Donchev, and of Culture, Vezhdi Rashidov, along with Bulgaria's EU Commissioner, Kristalina Georgieva.

The officials will visit the Serdika, Lavov Most, National Palace of Culture, NDK, and European Union metro stations.

The launch of the second metro diameter coincides with the opening of the beautiful Largo in the heart of the capital.

The archeological complex there is the most interesting site of Sofia's subway Barroso will be able to visit, according to the city's Mayor, Yordanka Fandakova. The pedestrian zone of the Largo boasts large glass panels where residents and visitors can observe the archaeological excavations. The new central Serdika 2 station is also an archaeological exhibit where the items on display will be changed periodically.

In addition, the EC President will be able to see the new subway trains and infrastructure such as refurbished boulevards and bike paths.

The launch of the second metro diameter in the Bulgarian capital Sofia is expected to reduce traffic in the city by 20%.

The second line will have 11 stations and will connect the districts of Obelya and Lozenets. The line has a capacity of 130 000 passengers a day. It will be served by 18 new energy saving metro trains.

The CEO of the municipal Metropolitan company, Stoyan Bratoev, says that the new line will save Sofia residents and visitors 65 000 hours of travel time every day. The subway will also reduce air pollution.

The end stations at Lomsko Shosse and James Bourchier boulevard have parking lots with hundreds of parking spaces.

The stations near NDK and the Hemus hotel have been designed as early as the time of the Communist regime. They included nuclear bomb shelters for the Communist party leaders with hermetically closing doors. The shelters have been demolished to open way for the subway tunnel. The last stop on James Bourchier boulevard is the deepest in Sofia, while the tunnel between the Hemus hotel and the James Bourchier station is 25-meters underground.

In addition, the stations are built to sustain earthquakes up to a 9-point magnitude on the Richter scale and can be used as quake shelters. The subway also boasts maximum security with all anti-terrorism measures in place and with cameras monitoring every inch of the tracks and all stations.

While in Sofia, Barroso will hold talks with Plevneliev and Borisov.