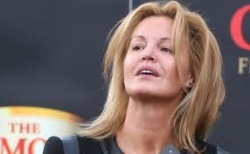 Even though the 47-year-old high jump legend ended her competitive athletic career more than 13 years ago, she is still the reigning world record holder.

Her world record is one of the longest standing in modern athletics. Over the years, Croatian star Bianka Vlasic has been the only female coming close to beating it, as she jumped 2.08 m in 2009.

Kostadinova has won one Olympic gold medal (1996) and two outdoor world titles (1987 and 1995), as well as five indoor world titles. She is currently the chair of the Bulgarian Olympic Committee.