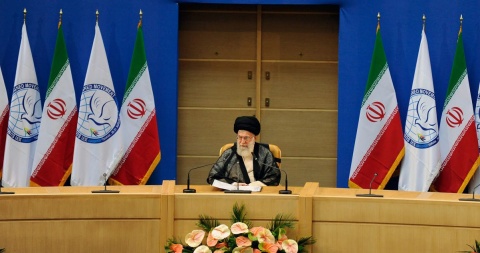 Ayatollah Ali Khamenei`s official website shows, Khamenei delivering his speech during the opening ceremony of the summit of the Non-Alligned Movement (NAM), the group of countries not aligned wit any of the powers blocs ,in Tehran, Iran, 30 August 2012.

Iran, hosting a summit of the 120-nation Non-Aligned Movement (NAM), is hoping the high-profile event will prove that Western efforts to isolate it and punish it economically for its disputed nuclear program have failed, international media report.

"Our motto is nuclear energy for all and nuclear weapons for none," Khamenei told the assembled heads of state.

In his speech, Khamenei criticized the U.N. Security Council as an illogical, unjust and defunct relic of the past used by the United States "to impose its bullying manner on the world".

"They (Americans) talk of human rights when what they mean is Western interests. They talk of democracy when what they have is military intervention in other countries," he added.