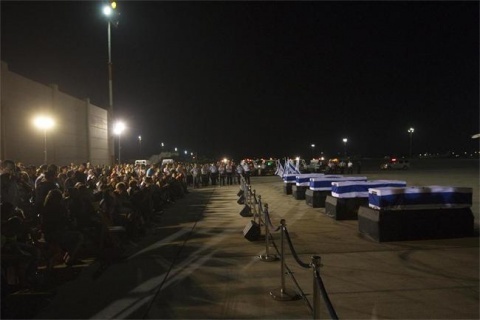 The coffins of the victims of the suicide bombing in Bulgaria arrived at the Ben-Gurion Airport on July 20.

A memorial service in honor of the victims of last month's Burgas bus bombing will be held in Bulgarian capital Sofia's synagogue on Tuesday.

The ceremony will be attended by relatives of the five Israeli tourists and the Bulgarian bus driver killed in the July 18 terrorist attack.

Bulgarian President Rosen Plevneliev and Israel's Vice Prime Minister and Minister of Strategic Affairs Moshe Yaalon will be also present at the ceremony.

The Sofia Synagogue is the third largest in Europe and can accommodate 1 300 worshippers. It is a part of the unique so-called "Triangle of Tolerance" in downtown Sofia, which also encompasses a church and a mosque standing a few just meters apart.

The relatives of the Israeli ictims will also attend a ceremony in Burgas, it was announced on Monday. Their visit to the Balkan country includes meetings with Plevneliev, Prime Minister Boyko Borisov and Transport Minister Ivaylo Moskovski.

The July 18 terrorist attack in Bulgaria's Burgas, also known as the Burgas bus bombing, killed 5 Israeli tourists and a Bulgarian bus driver at the Burgas Airport. The top lead, purported by Interior Minister, Tsvetan Tsvetanov, was that it has been executed by a suicide bomber, who arrived from abroad.