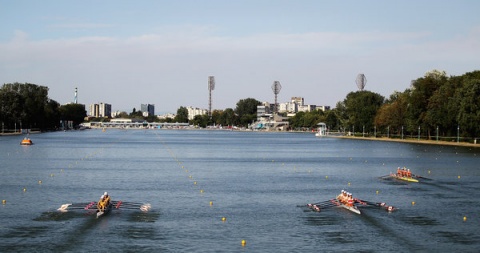 The world championships brought some 1,200 rowers from 57 countries to Plovdiv and put the city at the center of international rowing attention. Photo by Getty Images

from The New York Times

Svetla Otzetova, a grande dame of Bulgarian rowing, wore a perfectly pressed blouse, and her brow somehow managed to stay dry despite the stifling heat.

But Otzetova was sweating it.

A coach of the Swiss rowing team, an exacting sort, had flagged her down. What might be wrong? Otzetova asked. But the coach, Christian Stofer, wanted only to offer compliments. "Everything is tiptop," he said.

It was that kind of week for Otzetova, who was here overseeing this year's biggest and most prestigious rowing event short of the Olympics — the junior and senior world rowing championships — while at the same time eagerly selling Bulgaria to the international rowing community.

She carried two flip phones, a smartphone and two radio receivers, dispatching instructions in multiple languages while spending time with coaches, rowing officials and other V.I.P.'s. "Athletes like to be here," she said. "The number of participants has surprised some people."

With some 1,200 rowers from 57 countries, the world championships, which ended Sunday, put Plovdiv at the center of international rowing attention, exactly where Otzetova and many other Bulgarians wanted it.

After suffering more than two decades of sporting disappointments since the glory days under communism, the Bulgarians are plotting a comeback. And one piece of the plan is transforming Plovdiv, the country's second-largest city, into a first-class destination by expanding its Soviet-era rowing course.

"For a long time in Bulgaria everything that was associated with the old days was considered not good," said Krasimir Panov, an adviser to the Bulgarian sports minister, Svilen Neykov. The minister is a former Olympic rowing coach who married one of the country's most decorated rowers, Rumyana Neykova.

"After 20 years, people's minds have changed," Panov said. "People want better facilities, and they think we should be winning like before."

To that end, the Bulgarian government has spruced up a handful of faded sports facilities across the country, including Plovdiv's rowing site, and constructed a 12,000-seat arena in Sofia, the capital about 90 miles northwest of here.

It has also revived a practice once renowned across the former Soviet bloc — the intense development of child athletes with the sole goal of grooming them for Olympic medals and other world championships.

About 100 athletes in their late teens or early 20s are being prepped for the Olympics in 2016, Panov said, though most of the effort is focused on the longer term.

"Bulgaria once ranked seventh in the world in Olympic medals, but this year in London we only got two, a silver and a bronze," he said. "To achieve sporting success is a long process. So we are doing sports schools again with the children to become champions in 10 years."

Plovdiv proudly claims a tradition of producing sports standouts, but the gritty city's makeover is still a work in progress. An established regional rowing center, Plovdiv has yet to win over the international rowing community as a favored destination on par with sites like Lucerne, Switzerland, or the Olympic site at Eton Dorney near London.

The course here, built in the 1980s during the waning years of communism, sits aside a crumbling soccer stadium in a city that remains more than rough around the edges. Still, the course has many fans.

The shallow channel, a surrounding wall of poplar trees and the prevailing wind conditions combine to create an extraordinarily even competition, with rowers in all lanes getting virtually identical conditions — usually a tail wind or a consistent crosswind — and leaving no lane at a distinct disadvantage. That was clearly not the case at Eton Dorney, for example.

The water also has a reputation for being fast — the extreme summer heat raises the temperature, allowing boats to ride high — which always pleases rowers trying to break records. Even recurring aquatic weeds have been tamed by the stocking each year of about 5,000 grass carp, a warm-water fish that feeds on the plants.

"The course is almost like walking on the water," said Anita L. DeFrantz, an American member of the International Olympic Committee and the International Federation of Rowing Associations, who won a bronze medal in rowing in 1976 at the Montreal Games. "There are only a handful of courses like this in the world."

But Plovdiv also poses problems, both for rowers and international officials who select sites for major competitions. There was some infighting among Bulgarians in organizing the championships, and while the city boasts a rich past, it lacks the cachet and the tourism infrastructure of many other European rowing destinations.

Even so, one of the city's biggest drawbacks is about to be fixed thanks to several years of planning by Bulgarian officials and a big infusion of cash from the country's new patron: the European Union.

Next spring, construction begins on a second rowing channel as part of an .7 million urban development program backed in large part by the European Commission that is meant to help rejuvenate the neglected riverfront that abuts the sports complex. The development will include a wildlife sanctuary for rare cranes that nest along the Maritsa River; fishing areas; and walking and bike paths as well as other recreational facilities.

Most important for rowers, the second channel, which will double as an ice-skating rink in the winter, will allow athletes warming up and cooling down to be separated from the racing lanes. In big competitions like the championships, a single channel can create confusion on the water as racing boats must navigate around other boats awaiting their turn to compete or to exit the course.

"It is a particular problem when you have young rowers in an international competition for the first time," DeFrantz said. Because it is an Olympic year, the championships here combined junior contests — for rowers 18 and younger — with seven boat classes of the world rowing championships that are not on the Olympic program.

Samuel Pell Helms, 18, of Snohomish, Wash., who competed as a junior for the United States in a four-man boat, said an additional channel would be a vast improvement.

"It always seemed like you were running into somebody out on the water," said Helms, who last year rowed at the junior championships at Eton Dorney. "It felt a lot more crowded than London."

Not insignificantly, the second channel would also open the door to television coverage. Ivan Popov, a Plovdiv businessman who was a member of the Bulgarian organizing committee for the championships, said electronic media have been uninterested in covering the races because they are too difficult to follow with so many boats on the water.

"We are going to change that," Popov said. "Plovdiv will become a world center for water sports."

Otzetova, the former Bulgarian rower helping to oversee the events, has been an influential proponent of the new channel. A gold medalist in the 1976 Olympics who is active in the international federation, Otzetova has acted as a human bridge between old and new Bulgaria.

An architect, she helped design the rowing course here during Communist times when the site was doubled in length to 2,000 meters (about 2,187 yards) to accommodate international competitions. She has since been consulted in the design of countless other rowing sites, including the Olympic venues in Athens, Beijing and London.

Realistically, Otzetova said, a small country like Bulgaria will always have a hard time competing with bigger countries in landing international competitions like those envisioned here in rowing, kayaking and canoeing.

But she remains bent on trying, insisting obstacles are nothing new in Bulgaria.

"It was a big fight to get this built in the first place," she said.