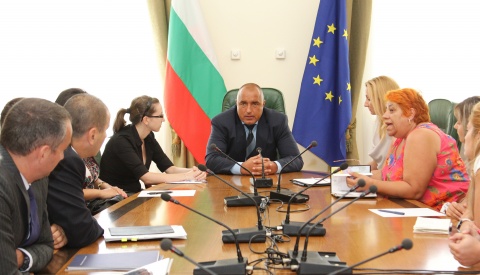 Bulgarian PM Borisov with relatives of the Bulgarian sailors detained on a cocaine ship in Spain. Photo by BGNES

Bulgarian Prime Minister Boyko Borisov has urged the 21 Bulgarian sailors busted in Spain on a ship carrying 3 tons of cocaine to cooperate with the Spanish authorities.

Borisov met Wednesday with members of the sailors' family, at the request of the latter, BGNES reported.

The worried families wanted the Bulgarian government to provide legal aid to the detained sailors.

Last week, Spanish authorities nabbed 31 people, including 21 Bulgarians, after seizing 3 tons of cocaine brought from South America on a ship caught off the southern coast.

The suspects are Doychin Doychev, owner of the Burgas-based Seaborne Trade company and the SV Nikolay ship, and Ruslan Kolev, the man who recruited the ship's sailors.

"Everybody must confess, and tell who, how, what they know," the Bulgarian PM told the sailors' relatives, making it clear that he was enraged over the entire incident but that the Bulgarian state would certainly provide legal assistance to the detained sailors.

Borisov told the families he had "sent" Interior Minister Tsvetan Tsvetanov to go to Spain on Thursday.

"We have the assurance of Mr. Borisov that the state is committed to assisting us in this case but we will await Minister Tsvetanov's return from Spain to make comments," Ivelina Atanasova, a relative of one of the arrested Bulgarian sailors, was quoted as saying after the end of the meeting with the PM.