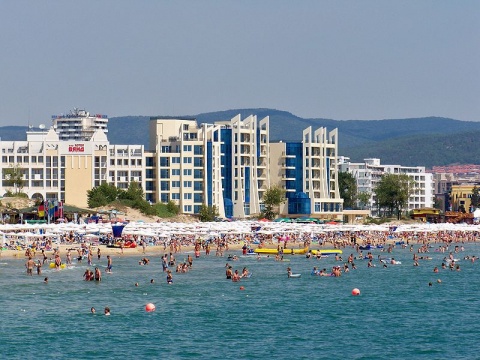 A crowded beach in Sunny Beach, Bulgaria's overdeveloped resort with some 300 000 beds. Photo from Wikipedia

The occupancy rate in the hotels in Sunny Beach has reached 100% in August 2012, announced Elena Ivanova, head of the Union of Hotel Owners in Bulgaria's largest resort.

She pointed out Wednesday that as of August 21, the hotels in Sunny Beach have reduced their prices, with further reductions expected in September, as cited by money.bg.

The so called "interim" summer season with lower prices will continue for about three weeks – between August 21 and September 10, when there will be further price reductions, Ivanova explained.

According to Slavi Panayotovo, a commercial director of a hotel chain in Sunny Beach, the resort expects an occupancy rate of 70% in September, when it will have more German, British, and Russian tourists over the age of 55.

Sunny Beach is traditionally known as a party destination for European youth, and is often criticized for offering low-end tourism products.