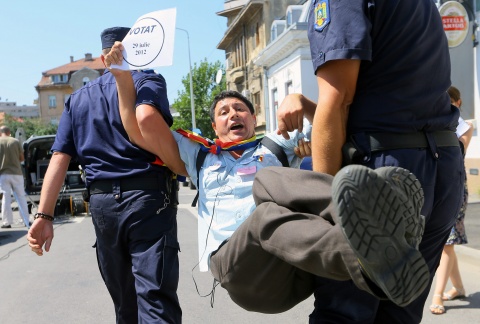 A protester against Romanian President Traian Basescu is carried by the police shortly after the Constitutional Court pronounced its Tuesday decision returning Basescu to power. EPA/BGNES

Romanian PM Victor Ponta and interim President Crin Antonescu have denounced a decision by Romania's Constitutional Court which made the way for a re-instauration of Traian Basescu as President.

Tuesday the Constitutional Court declared void the July 29 impeachment referendum against Basescu, based on finding that it is in fact true that less 50% of voters had participated.

"The decision of the court is illegal, unjust and politically motivated," stated PM Victor Ponta, adding that it allegedly "contradicts democratic norms."

Interim President Crin Antonescu concurred in calling the decision "unjust," adding it ignored the vote of some 8.5 M Romanians who voted against Basescu.

In the July 29 referendum, more than 87% voted for impeachment - but only 46% of registered Romanian voters took part.

Their grievances notwithstanding, both Ponta and Antonescu committed to respect the decision of the Constitutional Court.

PM Ponta further vowed to continue the cabinet's policy against what he described as an "oppresive rule" on the part of Traian Basescu.

In the past months, Romania has fallen in a deep institutional crisis that has pitched against each other the cabinet and President, both arguing the other side is encroaching on its constitutional powers.