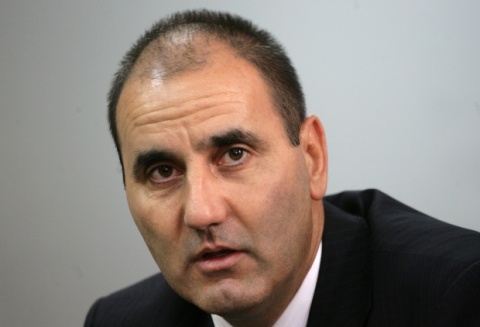 Bulgarian Interior Minister, Tsvetan Tsvetanov, has hinted about a possible link between the seizing of the 3 tons of cocaine in Spain and the arrest of alleged Bulgarian drug lord, Evelin Banev AKA Brando. Photo by BGNES

The three men who were arrested in Bulgaria in connection with the seizing of the 3 tons of cocaine from a Bulgarian ship off the Spanish coast have been released from custody late Friday evening.

All have made the commitment to remain fully available to the special anti-mafia Prosecutor's Office and they could be summoned for interrogation even as early as the weekend.

One of them is Doychin Doychev, the owner of the Seaborne Trade company and subsequently of the ship SV Nikolay (Saint Nikolay) where the narcotics were found. Doychev insist his company was in charge of the security of sailing, but not of the load.

The other one is Ruslan Kolev, 37, from the capital Sofia. He is believed to have been involved with the hiring of part of the crew. Bulgarian Interior Minister Tsvetan Tsvetanov, speaking for Nova TV, said that Kolev had a legal construction business in the country and a very comfortable income.

The third detainee, Hristo Hristov, 46, also from Sofia, was released Friday evening as well. He was allegedly the organizer of the narcotics transport.

Tsvetanov confirmed earlier statements that some of the people involved in the record-high cocaine load had communicated with alleged Bulgarian drug lord Evelin Banev AK Brando, but stressed there was no evidence of the latter's direct link to this crime.

On August 13, Spanish authorities nabbed 31 people, including 21 Bulgarians, after seizing 3 tons of cocaine brought from South America on a ship caught off the southern coast.

The operation codenamed Cartel has been carried out jointly by GDBOP, the French police, the US DEA and the UK COKA.

It was also reported that the ship, sailing under Bulgarian flag, has been intercepted and traced for two days and two nights by an ATR-42 aircraft of the Italian Finance Police.

The cocaine is of very high grade and its value is estimated at around EUR 150 M.

On Friday, Tsvetanov discussed the case over the phone with his Spanish counterpart Jorge Fernandez Diaz.

Diaz and Tsvetanov are expected to meet in Madrid next Thursday.