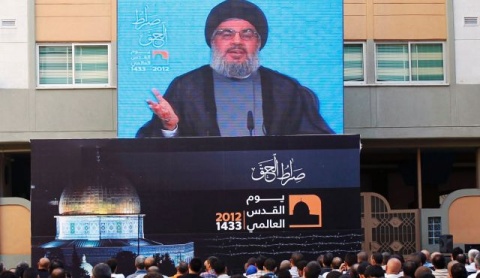 Hezbollah leader Hassan Nasrallah addresses his supporters during a Jerusalem Day rally in the southern suburbs of Beirut, August 17, 2012. Photo by Haaretz

Shiite militant group Hezbollah has threatened to transform the lives of Israelis to "hell" if Israel attacks Lebanon.

"Hezbollah cannot destroy Israel but we can transform the lives of millions of Zionists in occupied Palestine into a real hell,"Hezbollah leader Sheik Hassan Nasrallah has declared, as cited by The Washington Post.

Nasrallah said only a few rockets fired by the group's militia could cause massive casualties, given its well-planned target list.

"Rockets are ready and directed at these targets," he stated.

"We will not hesitate to use them, if we have to, at any point in time in the course of aggression against our country to protect our people," he added.

He also said that if Israel were to undertake any military action over Iran's controversial nuclear programme, "the response will be enormous".

"It would be the golden opportunity Iran has been dreaming of for 32 years," he said, referring to the date of Iran's 1979 Revolution.