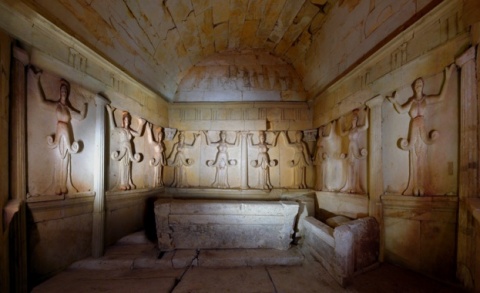 The Thracian royal tomb near the village of Sveshtari is one of the most sensational archaeological discoveries over the past thirty years in Bulgaria.Photo by BGNES

Bulgaria marks Friday in the northeastern town of Isperih 30 years of the sensational discovery of the Thracian Sveshtari tomb included in the world cultural-historical heritage of UNESCO.

In occasion of the anniversary, the first volunteer archaeological project is organized at the Sboryanovo site under the motto "Thracian Past – European Future" and the EU Program "Youth in Action."

The project includes two volunteers from each Poland, Romania, Italy, Turkey, Azerbaijan, Armenia and Belarus. Outside the program, three volunteers from Japan are joining in with the partnership of the Japanese ICI Foundation.

The Thracian royal tomb near the village of Sveshtari is one of the most sensational archaeological discoveries over the past thirty years in Bulgaria. Perfect as architecture, it amazes both with its wealth of sculptural ornaments as well as its vibrant colors. It is a remarkable monument of Thracian art and one of the biggest sensations of ancient archaeology in recent years. It was included in the UNESCO list over the extraordinary architecture and picturesque ornaments.

The site was unearthed during excavations in the historical-archeological reserve "Sboryanovo," situated between the villages Malak Porovetz and Sveshtari of Isperih municipality, in the river Krapinetz canyon and on the hills around.

The tomb consists of a passage (dromos) and three square chambers: ante-chamber, lateral chamber and main burial chamber covered by a semi-cylindrical vault. The plan of the building offers a new interesting example in Thracian building practice. The decoration of the tomb is executed in the spirit of the contemporary Hellenistic architecture. Its entrance is flanked by two rectangular columns (antae). Above them there is an architrave plate with a frieze in relief, consisting of stylized bovine heads (bucrania), rosettes and garlands. Ten beautiful female figures with hands raised high like caryatids are impressive. The figures are about 1.20 m tall, presented frontally, wearing long sleeveless dresses (chtons) tied with a thin belt below the breasts.

Two funeral beds, human bones and grave offerings were discovered in the central chamber. From the scattered stone details it was possible to reconstruct the facade of the tomb aedicule - naiskos, consisting of pilasters, cornice and a pediment, and closed with three stone doors. Being places in front of the large funerary bed as a symbol of the boundary between life and death, the aedicule isolated the grave of the deified ruler - the most sacral part of the tomb - from the rest of the place. In the center of the composition the goddess is offering a gold wreath to the ruler, rendered as a horseman facing her. On both sides of them there are processions of servants and armor-bearers carrying different gifts in their hands.

The time when the Sveshtari tomb was built (mid-3d century BC) coincided with the period of a great political, economic and cultural upsurge of the Thracian tribe of the Getae. The rich decoration and perfect architecture of the tomb speak for the political power of the ruler.

The Sveshtari tomb is part of the historical-archaeology reserve "Sboryanovo" which also includes the Thracian town of "Helis" and the Thracian sanctuary "Demir Baba Teke," along with several smaller Thracian tombs.