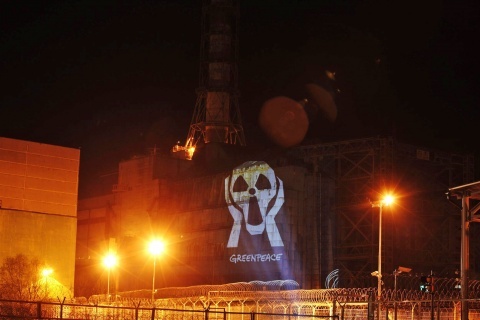 A handout photo released by environment organization Greenpeace shows a projection by activists on the wall of the Chernobyl "Sarcophagus." Photo by EPA/BGNES

The 30-km exclusion zone around Chernobyl, the site of the worst nuclear power plant disaster in history, is now safe and suitable for human habitation and farming activities.

According to senior Ukrainian radiation safety official, Oleg Bondarenko, only food crops should continue to be barred.

Speaking at a press conference he has said that radiation tests have shown that there are no longer "obstacles for people to live in Chernobyl," but nevertheless has reminded the law bans habitation in the zone.

"I think that we can start considering using at least part of the zone without restriction, especially in the southern end. For starters we should discuss sending staff to monitor the safety of the sarcophagus," Bondarenko is quoted explaining.

On April 26 1986, a powerful explosion seriously damaged one of the reactors of the Chernobyl nuclear power plant, releasing several tons of radioactive material into its surroundings, in what turned into the world's worst ever nuclear accident.

In April 2012, Ukraine launched the construction of a new sarcophagus around the destroyed nuclear reactor at the Chernobyl plant.

The step aims to secure the zone around the nuclear power station, which is still characterized by high radiation.

The construction of the new safety cover is scheduled to be completed in 2015, according to reports of international news agencies.

Some experts, however, have voiced doubts that the radiation problem will be solved with the new sarcophagus because the remaining radioactive material will not be removed.