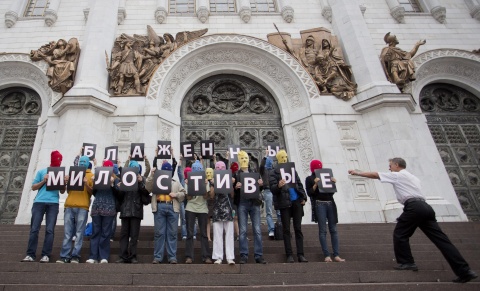 Supporters of Pussy Riot rallied on Wednesday on the steps of the downtown Moscow cathedral where the girls' punk group carried out an anti-Putin protest that could see three of its members handed jail sentences later this week.

Some twenty supporters clad in the group's trademark brightly-colored balaclavas held up letters that read "Blessed Are the Merciful" outside the entrance to the Christ the Savior Cathedral.

Eyewitnesses alleged security had attacked both protesters and journalists covering the event. Unconfirmed, independent YouTube footage appeared to show cathedral security damage the arm of one journalist and kick another in the face, the state-owned Russian agency said.

"This is the first time I've seen such aggression toward journalists in Moscow," wrote popular blogger Rustam Adagamov, who covered the protest.

On Tuesday, a Pussy Riot supporter was detained after scattering fliers calling for the group's release in the Red Square mausoleum of Vladimir Lenin, father of the 1917 Bolshevik Revolution. The 50-year-old man was fined USD 20 by a Moscow court on Wednesday morning.

The protests came two days before the verdict in the trial of three Pussy Riot members charged with hooliganism aimed at "inciting religious hatred" over the performance of a "punk prayer" at the landmark Moscow cathedral, where Russia's religious leaders traditionally celebrate religious holidays.

In February 2012, the group high-kicked and crossed themselves at the altar as they chanted a song entitled "Holy S**t" that called for the Virgin Mary to "drive Putin out."

Lawyers for the group deny the performance was anti-religion and insist it was intended to protest against Orthodox Church support for Vladimir Putin ahead of the March presidential polls that returned the former KGB officer to the Kremlin for a third term. Church head Patriarch Kirill called Putin "a miracle from God" who had who had "rectified the crooked path of history."

Prosecutors have asked for three years in a trial that has divided Russia and drawn sharp international criticism. A host of international and Russian cultural figures have expressed support for the suspects and Amnesty International has recognized them as political prisoners.

International supporters of the group have also staged or attempted to stage similar protests at Russian Orthodox churches in Vienna and Helsinki.

58% percent of Russians believe a jail term would be excessive, compared to 33% who endorse a custodial sentence, according to a nationwide survey conducted by the independent pollster Levada in late July. Levada quizzed 1,600 respondents nationwide and the poll had a margin of error of 3.4%.

But while a number of high-profile believers have expressed unease at the prolonged confinement of the suspects, two of whom have young children, the Church has not issued a public call for their release. The Church's powerful head, Patriarch Kirill, said earlier this year that he was "saddened" by calls from believers for leniency.

The Church's de facto spokesman on the case, Archpriest Vsevolod Chaplin, told RIA Novosti in an exclusive interview last month that he would not comment on the trial until the verdict had been announced by the court. But he also said that without repentance, there could be no forgiveness and to suggest otherwise was "an anti-Christian idea."