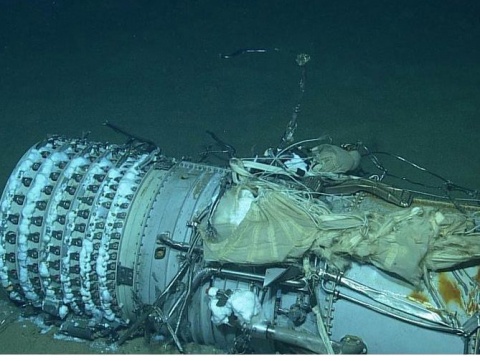 A handout underwater picture provided by Turkish Chief of Staff shows a piece of the wreckage of Turkish F4 war plane which was shot down by Syria over the Mediterranean Sea on 22 June. EPA/BGNES

An investigation by Turkish authorities has found no evidence that the Turkish reconnaissance aircraft that crashed on June 22 was shot down by Syrian air defense.

The conclusion of the investigation was reported by the Turkish newspaper Hurriyeton Friday.

A Turkish Air Force reconnaissance aircraft RF-4E left on June 22 from the Erkhach Air Base in Turkey's southeastern Malatya Province and disappeared from radar screens a half hour later while in Mediterranean Sea airspace on the western border of Syria and Turkey's Hatay province.

Syria initially said it fired at the Turkish aircraft after it unlawfully entered its territorial waters. Turkey, in turn, insisted the plane was shot down in international airspace and then its debris fell into Syrian territorial waters.

In its Friday edition, Hurriyet said the detailed report rejected the possibility of any involvement of Syrian air defense, based on the chemical and physical analysis of 20 fragments of the crashed aircraft.

The newspaper did not indicate whether the report pointed to a potential cause for the crash, as cited by RIA Novosti.

On July 13, the General Staff of the Turkish armed forces said the plane was shot down by Syrian defense.