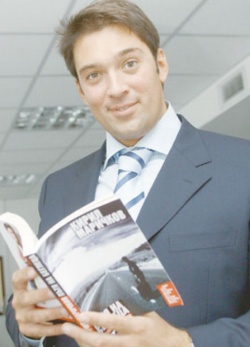 Kiril Maritchkov Jr, an ambitous wannabe diplomat, has become a persona non grata in the Vatican as a result of a gay sex story in a novel of his. File photo

Bulgarian Prime Minister Boyko Borisov has denied a freeze in the country's relations with the Vatican as a result of the latter's reluctance to accept the new Bulgarian ambassador, Kiril Maritchkov, because of a gay sex scene in a novel of his.

Borisov's comments come in the wake of a growing diplomatic scandal, after Kiril Maritchkov Jr., a 39-year-old lawyer who speaks five languages including Italian, and is married to an Italian woman, has been rejected by the Vatican even though he was nominated by Bulgaria's Borisov Cabinet as the country's new Ambassador to the Holy See.

Bulgarian newspapers and the Italian press are reporting that an explicit encounter between a young Eastern European male prostitute and a Roman in Maritchkov's popular novel, 'Clandestination', has upset officials at the Holy See, despite the Catholic church's less-than-spotless record on sexual transgression.

It has been reported that Archbishop Janusz Bolonek, the Pope's representative in Sofia, wrote to his superiors highlighting the offending part of the novel, which was a finalist for a book-of-the-year award in Bulgaria.

Reports in Sofia suggest the government there has dug its heels in and has refused to offer an alternative candidate for the role of ambassador.

The Vatican's chief spokesman Father Federico Lombardi told The Independent he could not comment on why Mr Maritchkov was persona non grata, but said it was not unusual for candidates to be rejected.

"Before someone becomes the new ambassador it's normal for two states to reach an agreement on the candidate," he said. "He has to be welcomed by the host state. In this case an agreement has not been reached. And I can't tell you why not. I cannot comment."

"We are not against the people's sexual identity" - this was the comment on the matter of Bulgarian Prime Minister Boyko Borisov, who is known for posing as a macho character, and for making remarks in the past about his political party's love for women that can be considered either homophobic, or sexist, or both.

Borisov commented on the issue during his visit in London where he met with UK PM David Cameron, the Bulgarian National TV reported.

He denied any reports that the relations between Bulgaria and the Vatican have worsened but said that he will ask Bulgaria's Foreign Minister Nikolay Mladenov for "additional information" on the matter.

According to Italian newspaper "La Repubblica", however, the relations between Bulgaria and the Vatican are frozen almost to the point of 1981 when the Italian authorities came up with an alleged Bulgarian connection in the terrorist attempt on Pope John Paul II's life (later disproved by John Paul II himself).