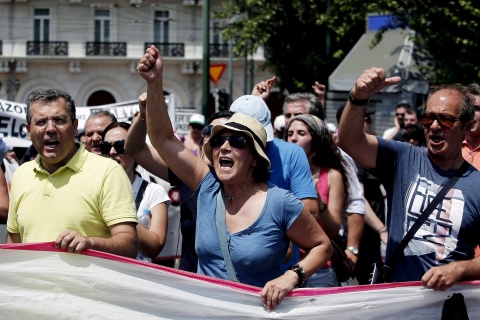 Bank employees of the Agricultural Bank of Greece shout slogans during a protest in central Athens, Greece, 03 August 2012. EPA/BGNES

The outlook on Greece's CCC rating, already eight levels below investment grade, was revised to negative from stable, S&P said in a statement.

The change reflects the risk of a downgrade if Greece is unable to obtain the next disbursement from the European Union and International Monetary Fund rescue package, the rating company said.

Greece's economy has been squeezed by the fiscal tightening needed to qualify for rescue-loan disbursements, with gross domestic product shrinking for five straight years and unemployment rising to 22.5 % from 7.9 %.

Finance Minister Yannis Stournaras said Tuesday the government is still working on identifying almost a third of the cuts required by international creditors to resume the flow of bailout funds, as cited by Bloomberg.

Bond-market history indicates that the utility of sovereign ratings may be limited. Almost half the time, yields on government bonds fall when a rating action by S&P and Moody's Investors Service suggests they should climb, according to data compiled by Bloomberg on 314 upgrades, downgrades and outlook changes going back as far as the 1970s.

After S&P stripped France and the U.S. of AAA grades, interest rates paid by the countries to finance their deficits dropped rather than rose.

Greece may need to consider reducing the number of state employees to achieve the fiscal targets, Stournaras told reporters in Athens on Tuesday after a meeting with President Karolos Papoulias. He said the savings may be achieved by reviving a "labor reserve" for civil servants, in which excess staff are placed in a special program for a period instead of being dismissed outright.

The comment drew immediate criticism from the leaders of the two coalition parties supporting the government of Prime Minister Antonis Samaras. "I am categorically opposed," Fotis Kouvelis, the leader of the Democratic Left party, told reporters after meeting with Samaras and Evangelos Venizelos, the former finance minister. "We must avoid adding more unemployed people to the ranks of those who are already unemployed." The plan is a "fiasco," he said.

"We see the likelihood of shortfalls, owing to election- related delays in the implementation of budgetary consolidation measures for the current year, as well as the worsening trajectory of the Greek economy," S&P said in the statement. "As a result of this economic weakness, and due to an absence of progress on tax administration reforms, collection of personal, corporate and indirect taxes is well below target for 2012."