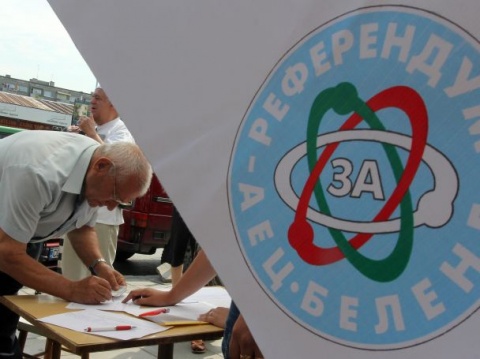 The Bulgarian Socialist Party collected 770 000 signatures in a petition supporting a referendum to build a second Nuclear Power Plant in Bulgaria. Photo by BGNES

The check of Bulgaria's GRAO of signatures collected in support of a referendum on the project to build a second Nuclear Power Plant, NPP, in the Danube town of Belene, will take at least 3 months.

The news was announced Tuesday by the Minister of Regional Development, Lilyana Pavlova.

The Directorate General of Civil Registration and Administrative Service, GRAO, is checking every single person on the list because the requirement is for them to have registered names and address and a social security number, Pavlova explained.

If 500 000 out of the total of the nearly 800 000 signatures prove valid, the check will be stopped and the State will proceed with the referendum.

On July 27, Sergey Stanishev, the leader of the opposition left-wing Bulgarian Socialist Party, tabled to the Bulgarian Parliament a referendum petition supported by 770 000 signatures.

On August 1, Bulgaria's Prime Minister Boyko Borisov, his Cabinet, and the ruling party Citizens for European Development of Bulgaria, GERB, voiced support for the holding of such referendum.

Bulgarian legislation mandates the Parliament and Cabinet are obliged to schedule a referendum under any petition that is supported by at least 500 000 signatures, which technically makes irrelevant the support that Borisov and the GERB party declared.

The Parliament has no right to refuse a referendum, but can change the question without altering its meaning, which is something those in power hinted of intending to do.

After years of uncertainty and hesitancy, at the end of March, Bulgaria's government officially gave up on Belene. The project was supposed to be built by Atomstroyexport, a subsidiary of Russia's state-owned Rosatom.