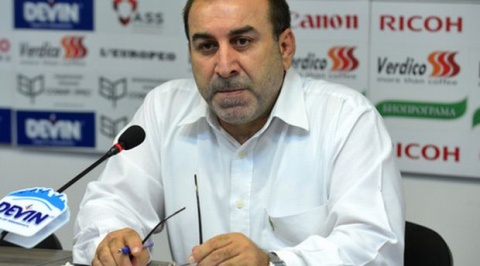 Dr. Yahiya Sharabati, the chairman of the Association of Syrians in Bulgaria, spoke at a news conference in Sofia. Photo by Dnevnik

Dr. Yahiya Sharabati, the chairman of the Association of Syrians in Bulgaria, has formally declared his joining the ranks of the opposition to the regime of Syrian President Bashar al-Assad.

"I formally declare to you today that I am against the bloody dictator of Bashar Assad, and that I support the just fight for peace and democracy of the Syrian people," Sharabati declared at a news conference in Sofia Tuesday.

He added that until recently he believed that the Syrian regime was going to undertake major reforms under public pressure but has lost any hope to see this happen. This is how he explained why he had not joined the opposition earlier even though in the past 1.5 years Syria has been technically in a civil war as one of the revolutions of the Arab Spring.

"Assad has got to go, and to bear the consequences of his bloody rule. The dictator is not legitimate," he stated.

Sharabati, who has been chairing the Association of Syrians in Bulgaria for the past 6 years, said there were different opinions among the Syrians in Bulgaria, which "is normal and democratic"; however, they are united by the common goal of wanting to see the bloodshed back home stopped.

"Assad claimed every day that he was going to change things. I went to Syria, I stayed there for 8 months, it's not like I've only been watching the events on TV. I realized that these changes weren't going to happen, and this is all a deception," explained the leader of the Syrians in Bulgaria.

He added that the Syrian Embassy in Bulgaria has exerted pressure on the Syrian community not to stage anti-regime protests.

"There were indications that anybody who rallied here will have something bad happen to them. I have been forced to speak in favor of the regime. I have relatives in Syria – a wife, two children, seven brothers," Sharabati explained.

He added that Bulgaria is a positive example of regime change and political transition.

"We wish to learn from you – you took the road of democracy without any bloodshed. I have lived here for 10 years during the dictatorship, and 20 years after that. I have learned how things happened peacefully," he elaborated.