FinMin about to Shut Bulgarian State Railways over 'Socialist Thinking' 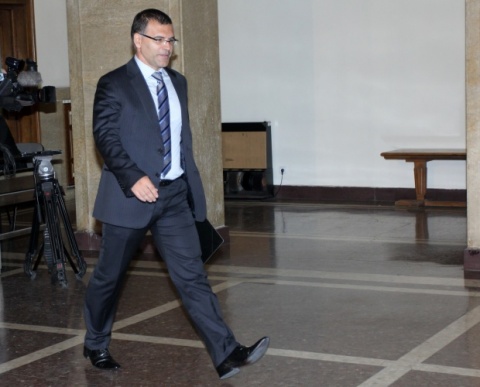 Bulgarian Finance Minister Simeon Djankov has decided to terminate the "socialist thinking" at the Bulgarian State Railways BDZ at a moment when the company is right about to collapse. Photo by BGNES

After terminating last month the monthly state subsidy to the ailing Bulgarian State Railways BDZ, Bulgarian Finance Minister Simeon Djankov has given the company management one weekend to come up with new reforms to save the company.

"If this happens, and these reforms and initiatives get approved, BDZ will receive its subsidy for August amounting to BGN 14 M," Djankov stated Friday afternoon, as cited by the Focus agency, just after BDZ CEO Yordan Nedev warned that the Bulgarian railways are about to collapse, and complained of his total lack of communication with the Finance Minister.

Djankov terminated the subsidy over BDZ's failure to pay off a World Bank loan from the mid 1990s.

"We will grant the subsidy at least partially but there is no way that this socialist thinking will continue - at the end of the day the state is paying everything, and it is not even us who took the loan. This has been going on since the time of Zhan Videnov (Bulgarian Socialist PM in the mid 1990s - editor's note), and I am going to stop that," Djankov elaborated on his highly controversial policies towards BDZ.

In his words, Transport Minister Ivaylo Moskovksi has already ordered the BDZ management to come up with a list of measures that is supposed to make it evident that they are doing anything possible so that the Bulgarian State Railways could pay at least some of their debts.

Djankov also said Moskovski and the BDZ management are doing a good job but they must stick to a clear principle: the company must be servicing the loans it has taken.

"Back in 1995 BDZ was still one company with NKZI ("National Company Railway Infrastructure") during the term of a prominent Socialist, Zhan Videnov, they got two loans from the World Bank. They have just squandered the money, and haven't been paying off their interest ever since. Several years ago the Finance Ministry started to pay off the first loan, which is smaller, but recently BDZ stopped paying off the second loan as well. So they expect the Finance Ministry to assume the interest under the second loan which are about BGN 30 M this year. We told them - there is no such funding in the state budget, you have got to pay it off, we know your situation is difficult," Djankov summarized the situation.

He also noted that the July subsidy of BGN 14 M that the Finance Ministry was supposed to grant to BDZ but did not was still smaller than the sum the state company owes the budget for 2011 - BGN 24 M plus another BGN 6 M by the end of the year.

He explained that the cash-strapped company urgently needs the transfer of BGN 14 M from the State in order to keep serving passengers. The State subsidy for BDZ was halted a month ago over the default on a World Bank loan in the amount of BGN 150 M.

The emergency body will most likely start functioning early next week, and will include the BDZ management as well as Transport Minister Ivaylo Moskovski and deputy transport ministers, Nedev told BTA Friday afternoon.

The CEO has reminded that the Finance Ministry led by its chief Simeon Djankov has terminated the monthly state subsidy for BDZ without any explanations. In his words, this may force the company to halt some or all of its trains at any given moment.

Nedev also declared that the Finance Minister has no right to terminate the state subsidy for BDZ because this is a violation of the State Budget Act, which stipulates that subsidies of this kind cannot be terminated or withdrawn.

When asked if he had managed to talk to Finance Minister Simeon Djankov, the BDZ CEO said he has had no contacts with Djankov, and does not even hope to have any.

Nedev neither confirmed, nor denied his intention to resign, stating only that his resignation would be logical in the current situation.

The crisis in BDZ is getting deeper and deeper, and the company's total debts are approaching BGN 1 B.

On Thursday, Bulgarian Prime Minsiter Boyko Borisov offered German company Siemens and German bank KfW to take over BDZ Freight Services in exchange for a debt that BDZ owes to them for the purchase of 50 Siemes Desiro trains.