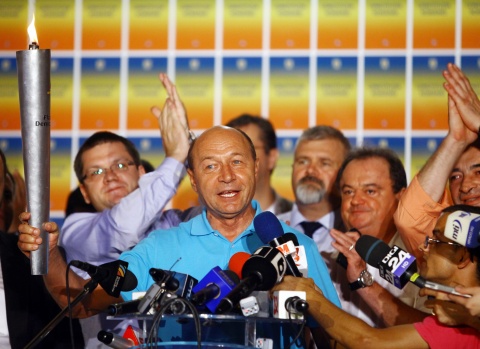 The Constitutional Court of Romania has postponed for September 12 its decision for the validity of July 29 impeachment referendum for President Traian Basescu.

Monday Romania's electoral authorities had announced that the referendum asking for a Basescu step-down is not passing due to a turnout of less than 50% of voters.

The Constitutional Court has to certify the referendum result, a decision which was expected Thursday, until the Court announced it will postpone it until mid-September.

The Court has stated it wants to check electoral lists of voters before it approves the result, so as to see whether the turnout of 46.24% is correct.

This will prolong a drawn-out political crisis in Romania, which has resulted from a conflict between Traian Basescu and his Democratic Liberal Party and PM Victor Ponta and his Social-Liberal Union.

The two senior statesmen have accused each other of encroaching on the other's constitutional powers.

EU leaders have slammed PM Ponta of what they said was close to breach of the rule of law in the staging of the impeachment referendum.

Among other things, Ponta's cabinet has significantly decreased the independence of the Romanian Constitutional Court.

Monday the Romanian PM had stated that although Basescu is allegedly "no longer legitimate" as President, he would confront him no longer.

Until Traian Basescu is officially restored as Romania's President, the office will be occuped by former Social-Liberal Union co-leader Crin Antonescu.