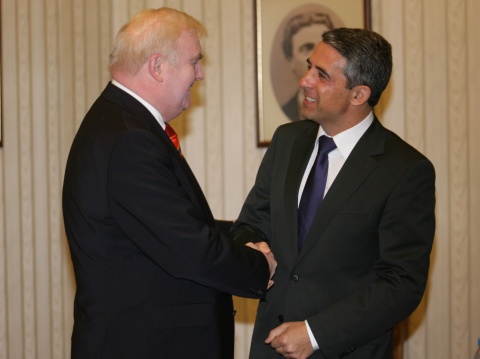 Hans Heinrich Driftmann, the President of the Association of German Chambers of Industry and Commerce (left), was welcomed by Bulgarian President Rosen Plevneliev (right) in Sofia Thursday. Photo by BGNES

The German economy sees an extremely great potential in Bulgaria, according to Hans Heinrich Driftmann, the President of the Association of German Chambers of Industry and Commerce.

"We will support Bulgaria if Bulgaria itself wants it," said the head of the apex organization of 80 regional chambers of commerce and industry in Germany.

Driftmann told reporters he and Plevneliev, who is a former construction entrepreneur with work experience in Germany, started their talks on how to boost the German investments in Bulgaria during the Bulgarian President's visit to Germany earlier this year.

"Germany's interest towards Bulgaria is great even in today's insecure times. Bulgaria is an anchor of stability, and this makes it a favorable investment destination," said the German entrepreneur.

In his words, some economic sectors in Bulgaria are still undergoing reforms but in the recent years Bulgaria has achieved a lot in economic and political terms. He praised the "culmination" in the trade exchange between Germany and Bulgaria as a positive message to investors.

He and Plevneliev are reported to have identified a number of specific areas for joint projects, and the Bulgarian President has promised his all-out support for German investors.

At the same time, however, the President of the German-Bulgarian Chamber of Industry and Commerce Bertram Rollmann was devastatingly critical of Bulgaria as an investment destination.

In his words, there are a lot of bureaucratic obstacles to development of business in Bulgaria.

"Bulgaria is not a very secure location as far as law is concerned," he said, as cited by money.bg. Rollmann further criticized Bulgaria with respect to healthcare and justice reform.