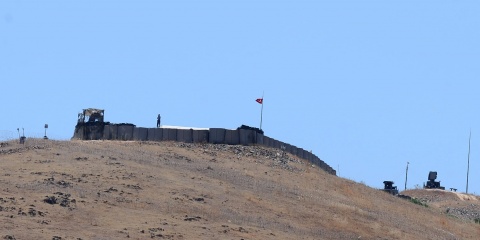 A Turkish soldier guards at a Turkish military base which have missile defence battery systems near the Turkish-Syrian border in Kirikhan district, in Hatay, Turkey 04 July 2012. EPA/BGNES

The Turkish army is conducting exercises with ground forces and tanks near its border with Syria, Turkish national media reported on Thursday.

The Turkish military held tank exercises on the Syrian border on Thursday, Dogan news agency said, in a show of force apparently aimed at Syrian Kurds linked to separatist guerrillas in Turkey who are said to control areas on the Syrian side.

There has been no indication Turkish troops would cross the border, but NATO-member Turkey has warned any attack emanating from a PKK presence in northern Syria could give it reason to intervene. Ankara has repeatedly bombed and sent troops into parts of Kurdish-run northern Iraq where the PKK has camps.

Some 25 tanks took part in the exercise in the Nusaybin district of Mardin Province, just 2 km away from the Syrian border on Wednesday. The drills are expected to continue for a week.

The Turkish government has been concerned by reports that a Kurdish group linked to the outlawed Kurdistan Workers Party (PKK) controls Kurdish areas in northern Syria and near the Turkish border.

Turkey has warned it will attack PKK positions in Syria if it comes under attack.

Dogan said tanks and missile batteries conducted maneuvers one km (less than a mile) from the Syrian border in the Suruc district of Sanliurfa province, directly across from one of the Syrian towns reportedly controlled by Syria's Democratic Union Party (PYD).

Ankara, which has tried and failed to crush the PKK's 27-year-old campaign for autonomy in largely Kurdish southeastern Turkey, is alarmed by the prospect that a power vacuum in Syria could embolden its own Kurdish separatists.

Turkey's Foreign Minister raised the issue of the Syrian government's loss of control over territory with the president of the autonomous Kurdish region of northern Iraq on Wednesday.

"Any attempt to exploit the power vacuum by any violent group or organization will be considered as a common threat, which should be jointly addressed," the foreign ministry said following Foreign Minister Ahmet Davutoglu's talks with Massoud Barzani, head of Iraq's Kurdistan region.