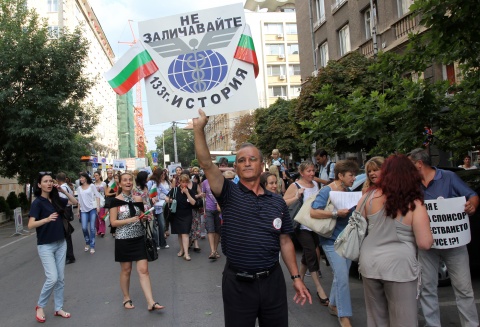 Pictured: Customs officers rallied twice in Sofia against the relocation of the Bulgarian Customs Agency to Ruse. Photo by BGNES

The relocation of the headquarters of Bulgarian state institutions from the capital to the provinces will generate enormous costs, according to Mika Zaykova, a financial expert at the Podkrepa ("Support") Labor Confederation, a Bulgarian syndicate.

Zaykova estimated only the relocation of the Bulgarian Customs Agency from Sofia to the Danube city of Ruse will cost the state budget about BGN 100 M (roughly EUR 50 M).

The resettlement of state institutions around the country has been the brainchild of Finance Minister Simeon Djankov, who has promoted it as a way to boost development in Bulgaria's provincial regions, and is yet to materialize.

"There will be enormous expenses for relocating back and forth, with the modest result that some people in Sofia will lose their jobs, and some people in Ruse will gain 300 jobs," she told the Bulgarian National Radio Wednesday night.

Last week the employees of the Bulgarian Customs Agency staged two rallies in Sofia protesting vigorously against the plans for the relocation of the institution.

Zaykova has defended the demand of the Bulgarian syndicates urging the government to increase the minimum monthly wage, which is BGN 290 at present, to BGN 330.