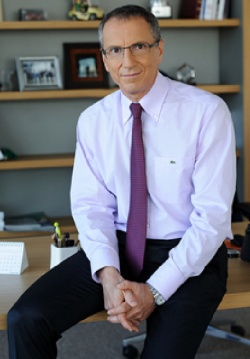 "He is a Frenchman, he is elegant, he is a strategist, he is a leader, he is a CEO, he is a brand name." With these words the employees of VIVACOM (Bulgarian Telecommunications Company), like to describe their CEO, Bernard Moscheni.

Bernard Jean-Luc Moscheni came from Belgium to Bulgaria back in 2008 and the reason for that change was called Vivatel - today's VIVACOM. This is the first telecom company in Bulgaria and the fastest developing mobile operator in the country. But why has the Frenchman, Bernard Moscheni, been chosen to lead VIVACOM? The answer lies with his extensive experience in finance and telecommunications.

After graduating with a degree in Economics and Finance at the Institute of Political Sciences in Lyon, Mr. Moscheni worked in France, Mexico, Italy, Belgium, Romania, and today in Bulgaria. His career began in Renault and Suez Bank.

His real dedication to the telecommunications world started in 1994 when Mr Moscheni became Chief Financial Officer of France Telecom participation in Telefonos de Mexico (Telemex). His work in Telemex took him to Mexico, where he was responsible for developing the network of a subsidiary fixed operator. Since 1997 he had also been involved in the establishment of a subsidiary of France Telecom – MobilRom which became Orange Romania.

In 2002 he was CFO, but later he was promoted to CEO. Just before becoming CEO of VIVACOM, Bernard Moscheni was CEO of the leading Belgian telecom operator, Mobistar.

Today Bernard Moscheni is on Bulgarian soil, although he spends most of his time up in the air on the 15th floor of VIVACOM's headquarters in Bulgaria's capital, Sofia. From there he has a view of the dynamic life in Sofia, and of one of the biggest companies in Bulgaria, with over 3 000 employees. Bernard Moscheni is friendly, cheerful, gallant and polite, and he is also strict and demanding. He owes his behavior to his French origin and education, as to some of the slogans that guide him in life: "Keep smiling and everything will be perfect!" and "Relax, stay cool and be natural!"

Bernard Moscheni speaks with great gratutide and pride about his Bulgarian employees. Mr. Moscheni is a man of vision. When he became CEO of VIVACOM, he replaced all foreign managers with a Bulgarian team of professionals, who knew the Bulgarian reality, the market, and the needs of Bulgarian clients better than the foreigners.

The trend is still kept as today there are hardly any foreigners working in VIVACOM and there is no need of such. The company itself invests heavily in the training and professional development of its employees who are constantly improving. Attempts by Mr. Moscheni to broaden his knowledge in Bulgarian language have so far remained unsuccessful. He understands Bulgarian quite well, but orally the language remains an obstacle – even harder than managing a telecommunications company!

According to VIVACOM's CEO, Bulgarians are lucky! As a great lover and admirer of nature, Bernard Moscheni is even jealous of the natural resources of our country. He takes advantage of them in any convenient way and time. The Frenchman loves to make long walks in the mountains and to play golf. VIVACOM is a sponsor of golf clubs and tournaments (St. Sofia Golf Club and BlackSeaRama). And of course Bernard is fan also of high-speed racing. Bernard is driving a Lexus hybrid but his favorite car is his old Austin from 1967 which he bought in Germany already restored. In addition the many championships won by the VIVACOM Rally Team are a reason to be proud of the company's decision to support the best ones!

Sofia remains one of the favorite cities of Mr. Moscheni. The geographic position of the beautiful Vitosha mountain near the city reminds him of his Alpine hometown, Grenoble. According to the Frenchman, however, Sofia has other great advantages, which not a lot of European capitals have – everything is close by and life is not expensive. The most precious things remain the friendships and contacts he has made over the years in Bulgaria.

Bernard Moscheni's love for Bulgaria is also shared by his family. The CEO of VIVACOM is living here with his wife Marie-Angele and their daughter, Laure. His wife got so involved into our country that one of her hobbies became to restore icons.

Thanks to that passion she has visited several monasteries and knows very well the Bulgarian lifestyle, mentality and traditions, which she constantly shares with her husband. Bernard, however, rarely has time to study the Bulgarian culture in detail. Due to the numerous social events and frequent encounters with Bulgarian athletes, artists, writers and cultural figures, Mr. Moscheni is well acquainted with the current development of the Bulgarian culture and its achievements.

A healthy mind, strengthened through hard work, in a healthy body, supported by long walks in the foothills and ridges of the Bulgarian mountains – this is clearly one of the formulas of success of Bernard Moscheni.