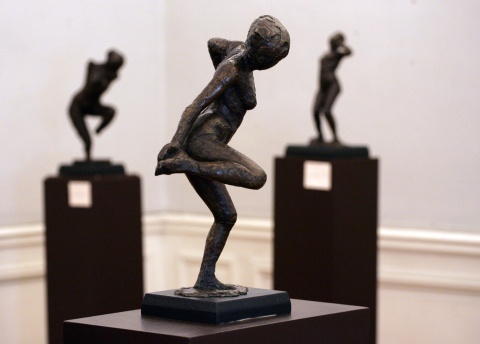 A total of 74 sculptures of French artist Edgas Degas were presented at one of the most successful exhibits in Sofia in the fall of 2010. Photo by BGNES

What is it that connects the Bulgarian mobile operator VIVACOM with France? Those who know the management structure of the Bulgarian telecom will immediately raise their hand, and state that the link between them is Frenchman Bernard Moscheni, the CEO of VIVACOM.

This would be a correct but incomplete answer. The strongest link between the telecom and France lies with culture! Thanks to the traditional partnership of VIVACOM and the Center for Culture and Cooperation of the French Institute in Bulgaria, and the long-term relations of cooperation that the telecom has maintained with the French Bulgarian Chamber of Commerce, VIVACOM gets involved and supports financially a large number of cultural initiatives designed to promote French culture in Bulgaria.

The French Institute is one of the most active cultural institutions in Bulgaria. Its cooperation with VIVACOM dates back to the beginning of 2008 when Frenchman Bernard Moscheni became the CEO of the Bulgarian Telecommunications Company. Thanks to this partnership in the recent years VIVACOM has supported a number of significant cultural events for Bulgaria having to do with French culture.

For several years, the program of the French Institute in Sofia has included the organizing of exhibitions presenting the works of renowned contemporary and classical French artists. VIVACOM has traditionally supported these projects of the Institute, and has assisted in the promotion of the achievements of French arts with the Bulgarian audience. Here we can note the expositions of Pierre et Gilles (Pierre Commoy and Gilles Blanchard), Pierre Fava, and Edgar Degas that generated great public interest.

The exhibition of the French artistic couple Pierre et Gilles was organized in 2008 in the Sofia Art Gallery. The photographer and artist are known for their unique technique of intertwining the images of world celebrities into miraculous storylines created with computer-generated photo imaging.

The exhibition of the French impressionist Edgar Dega, which took place in Bulgaria's National Art Gallery in October 2010, has turned into one of the most visited expositions in Bulgaria in the recent years. The visitors had the opportunity to get acquainted with the sculpture works of the French artist through 74 sculptures including a replica of his most popular and controversial sculpture, "Little Dancer of Fourteen Years".

The Light on Black exhibition in May 2010 presented the works of young French artist Pierre Fava. The event was part of the European Night of Museums initiative that is organized in Bulgaria at the initiative of the French Cultural Institute, with the support of VIVACOM.

Before the hall there was also a "paper street" with workshops, demonstrations, performances, a carnival, and children's games. VIVACOM Art Hall, which was opened on 04.10.2012 is part of the telecom's strategy to create an added value shared with the society. With its 500 square meters, the hall presents on a daily basis various cultural projects, exhibitions, and events establishing itself as one of the top Sofia venues for free access to contemporary culture and arts.

The Bulgarian Telecommunications Company supported the first Bulgarian edition of the European Month of Photography, which was created 30 years ago as a French initiative.

It was organized in Bulgaria for the first time in November 2011 by the French Cultural Institute and the Easyart Foundation. The project included state-owned and private galleries, EU cultural institutions, professionals, and amateurs. It featured more than 20 topical and monographic photo collections that were presented individually or in a dialogue with other Sofia or Paris collections, or state or private collections.

It is also thanks to the work of the French Cultural Institute that the Holiday of Music is now celebrated in Bulgaria. This event is held each year on June 21 in over 100 countries, having begun 30 years ago in France. The rationale of this holiday is to provide performance opportunities to musicians (amateurs and professionals alike) from all musical genres. The holiday turns everywhere into a real celebration that is enjoyed by both the artists and the numerous audience. Thanks to the French Cultural Institute and VIVACOM, the Bulgarian audience has the opportunity to discover and experience this international holiday.

Another French tradition that has turned into an international one is the famous annual presentation of „Beaujolais Nouveau". As a member of the French-Bulgarian Chamber of Commerce VIVACOM has been supporting for the past three years the presentation of the new vintage of Beaujolais in Bulgaria. The event is held all over the world; by tradition this happens on the third Thursday of November. The French tradition to present the new Beaujolais was introduced to Bulgaria in the past decade. The event brings together each year representatives of the government, business, culture, and media.

One of the most large-scale national campaign that VIVACOM has initiated is the donations initiative "Operation Farthing" that is conducted under the honorary auspices of H. E. Philippe Autie, Ambassador of France to Bulgaria. The campaign has been created following a French model, and assists the "Hope for the Littles Ones" Foundation, which offers an alternative of foster care for abandoned babies and young children in the "Small House" in Sofia's Knyazhevo Quarter.

The purpose of the campaign is to allow anybody who wishes to do so to leave their change in one of the thousands of boxes at various venues all over the country. The funds raised this way are used to support the functioning of the foster care center where children get individual care and attention. In 2011 alone, this cause was supported by a total of 12 companies, and in 2012 there are 9 more partners are joining in.

This is the first initiative of its kind in Bulgaria which has managed to bring together so many firms from the private sector for a common cause that is already yielding results. In 2011 alone, the initiative raised over BGN 50 000, and all babies that were taken to the foster care homes were later accepted into foster families. Just recently, "Operation Farthing" was awarded a prize by the Civil Initiatives Workshop Foundation. VIVACOM's donations initiative received the "Together" Award for staging the most efficient campaign in 2011.

Thanks to a Fund that has been built up by VIVACOM, the company also supports a number of initiatives stemming from the field of French culture. The Fund is a transparent platform that unites all VIVACOM projects that have to do with sponsorship and corporate social responsibility.

The company declares through it its commitment to the significant and current issues that matter for the life of its clients and the society. The choice of causes and ideas that the telecom supports is based completely on its values. The VIVACOM Fund supports significant and sustainable projects in the fields of culture, sports, education, healthcare, and the social sphere.