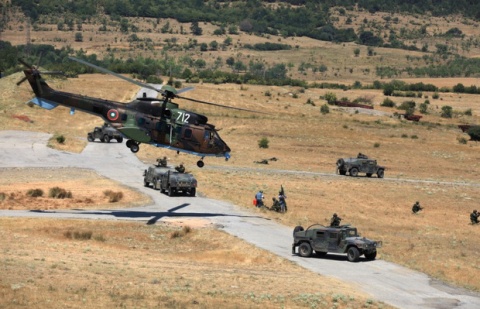 "Our joint training has achieved its goals – it is a clear example for intelligent defense with the participation of unites from Bulgaria, the USA, Serbia, Macedonia, and Ukraine," Angelov stated on Monday, after the end of the VIP day during the joint Bulgarian-US exercises.

The Bulgarian Defense Ministry said in a statement that for the first time Black Sea Rotational Force – 12 brought together military units of Bulgaria, the USA, Macedonia, and Ukraine whose drills could be witnessed at two different trainings grounds – the Bezmer Air Base and the Novo Selo Training Ground.

"These joint facilities that we have with the USA are contributing to the perfecting of the joint training of the three types of armed forces that we have, the US forces as well as the forces of our partners," Bulgarian Defense Minister Anyu Angelov said, adding that the newly-built US section of the Novo Selo Training Ground is to be opened in November.

The VIP Day of Black Sea Rotational Force – 12 was opened Monday with a joint operation of the Bulgarian Special Operation Forces and a US special intelligence unit.

Later the forces of Bulgaria, the USA, Macedonia, and Ukraine practiced neutralizing an attack on a convoy.

The Bulgarian-US military training entitled "Black Sea Rotational Force – 12" is taking place between June 27 and August 5, 2012. It features 500 Bulgarian troops from the Army, Navy, and Air Force, and units of the US Marines, and is supposed to increase the interoperability of the Bulgarian and US forces.