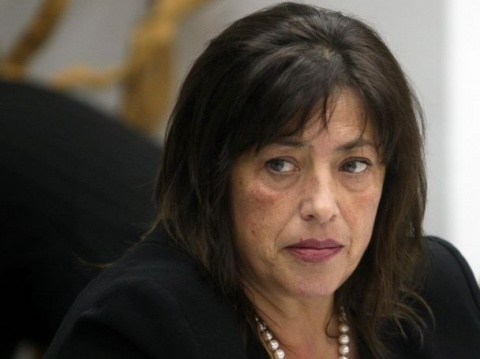 The Mayor of Pernik, Rositsa Yanakieva. Photo by BGNES

The Mayor of Bulgaria's western city of Pernik, Rositsa Yanakieva, is being referred to the prosecutor's office for misuse and mismanagement of disaster funds.

The funds were slated by the State after the 5.8 magnitude on the Richter scale earthquake, which shook the city on May 22, causing wide-spread building damage.

The news about the pending prosecutor probe was announced Thursday by the Chairman of the Pernik Municipal Council, Vladislav Karailiev.

The attack on Yankieva, who was elected in October 2011 on the ballot of the left-wing Bulgarian Socialist Party, BSP, came from municipal councilors from the ruling, center-right Citizens for European Development of Bulgaria party, GERB, who accuse the Mayor of mismanaging BGN 2.7 M and spending them in an "insane way."

They insist that instead of using the funds for construction materials, the Mayor had repaired and remodeled her office and had appealed to not distribute compensations to the affected people on grounds "they can manage on their own."

The GERB municipal councilors also demand the Mayor's resignation over being unable to deal with the situation and for embezzling State money.

Yanakieva firmly rejects all and any accusations labeling them blunt lies.

She says the only way to handle the earthquake's aftermath in Pernik is for the State to back the City Hall.

"Otherwise, if by September people don't receive their compensations and assistance, I will personally lead them to a protest rally in Sofia where we will set a tent camp right underneath the windows of the government offices," the Mayor declared.

According to her, it is mindboggling that someone can ask for her resignation when there is not enough money for repairs and other assistance. She also threatened to notify the European Commission over the unpaid compensations to people who suffered material damage from the tremor.