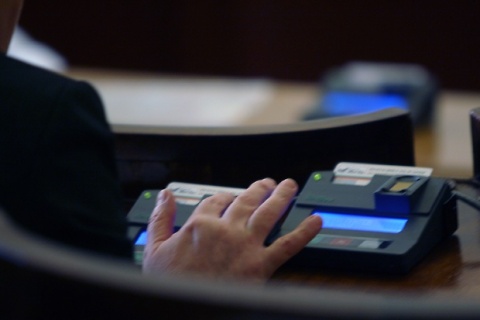 The Bulgarian Parliament dropped at second reading the most controversial texts of the notorious Forestry Act. Photo by BGNES

The Bulgarian Parliament passed at second reading the most controversial paragraph five in the Forestry Act, submitted by MPs from the ruling GERB party.

The move came after thousands of Bulgarian eco activists and other citizens opposing the Forestry Act staged week-long protest rallies in the area of the key Sofia intersection Orlov Most (Eagles' Bridge) after the Parliament passed the amendments to the Act on June 13.

The following Saturday the President issued a veto on all of the texts, which was passed by the Parliament on June 27.

The readings happened after the eco activists and the ruling officials reached consensus on the new Bill.

The new amendments now provide for part of the already existing ski lifts to be granted a 20-year construction permit, without including the terrains in the forestry fund. The ski equipment on the Vitosha mountain near the capital Sofia was built before 1987, which is why the above amendment was proposed by the environmentalists. It aims at resolving the issue with the replacement of ski lifts since many of them are obsolete. According to the legislation, without a construction permit they could not be replaced, but only repaired and refurbished.

At the beginning of December 2011, the concessionaire Vitosha Ski refused to turn on lifts and other ski facilities on Vitosha, on the grounds texts from the Forestry Act are making the activity illegal.

The law mandated owners of such equipment and facilities to have an established "servitude" (a status for full-rights on the use of real estate) in order to clean and secure the lifts paths. Vitosha Ski was prevented from applying for it over them lacking an approved comprehensive development plan (PUB).

During the public debates on the controversial amendments to the Forestry Act, the owner of Vitosha Ski, banker Tseko Minev that the ski lifts on Vitosha will remain closed during the next season as they did last winter, which outraged yet another time citizens, eco activists, and winter sports lovers.

On July 5, they staged a mass protest rally with demands to the City Hall to reexamine Vitosha Ski's concession contract and annul it.

The Mayor of Sofia, Yordanka Fandakova, later announced that the ski lifts will be turned over as early as the summer.

The municipal company "Ski Lifts" was privatized by Vitosha Ski in 2007 when current Prime Minister of Bulgaria, Boyko Borisov, was Mayor of Sofia. Three lifts in Vitosha were sold to Minev's business then.

The concessionaire issued a declaration insisting that the participants are not environmentalists, but people representing "a certain business.

The new text will allow Vitosha Ski to replace ski equipment near the capital.

The opposition from the left-wing Coalition for Bulgaria and the far-right, nationalist party Ataka, once again accused the ruling Citizens for European Development of Bulgaria, GERB, of lobbyism and passing unfeasible amendments.

No one from GERB even took the stand to respond to the attacks.