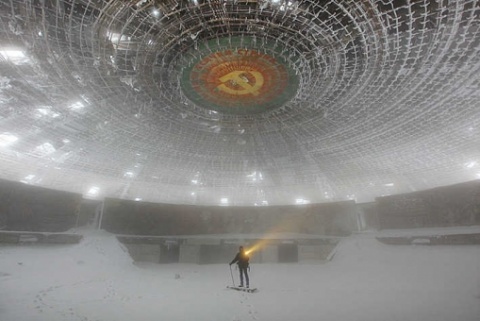 Ever since then, the socialists, who still hold a yearly convention in August near the site in the Stara Planina mountain, have not decided what to do with the spectacular but dilapidated building.

"We will need some BGN 15 M for a thorough repair of the building, and that is an amount that we will have a hard time obtaining," said Stoilov at a party sitting Saturday.

He also revealed that the party would need a further BGN 150,000 each year for the building's maintenance.

The socialists however vowed to find a way to gather funds and turn the monument into a national site for celebrating social democratic ideas.

Nevertheless, the Bulgarian Socialist Party still has the option to return the Buzludzha Monument to the state.

The modernist monument was built in 1981 on the 90th anniversary of the original Buzludzha congress and has since been viewed as glorifying Bulgaria's former communist regime.

Since the start of the transition in 1989, the Bulgarian state has not found the funds and will to maintain it, and it quickly fell into major disrepair.

It has become famous worldwide due to uncanny pictures taken by foreign photographers, as well as the "Forget Your Past" graffito written above the main entrance.