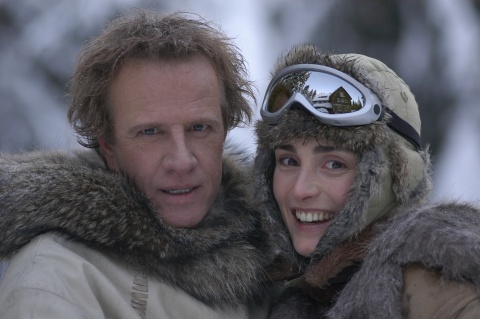 Belmeken or the Big North? Pernik or Chechnya? "The magic of the cinema!", exclaimed Le Figaro journalist, when faced with the conundrum. The man behind this magic is Patrick Sandrin, one of the most popular and successful French film producers, who made possible East-West, Vercingetorix, The Last Bey on the Balkans, Vatanen's Hare – a string of internationally acclaimed movies, shot partly or totally in Bulgaria.

His magic wand turned Bistritsa, a picturesque village huddled at the foot of the mountain near Sofia, into a small cowboy town, surrounded by the lush landscape of the Canadian Rockies. While Pernik, a dilapidated town city not far away from the capital, woke up one day as a post-war Chechnya suburb.

When the time comes for lights, camera, and action, moviemakers whose scripts are set in the Big North, Canada or Russia are able to shoot their films in the Balkan nation for a fraction of the cost. The movies shot in Bulgaria are not only of competitive price, but high-quality too, so much so that even sophisticated cinephiles are not that difficult to deceive. When the winds of change brought Patrick Sandrin to Bulgaria, just as the communist regime toppled in 1989, he devised the sort of business that only a popular movie producer who divides his time between Paris and Sofia could come up with. Sofilm is a Sofia-based production company, which combines local experience with the expertise of a French film production company, capitalizes on Bulgaria's potential for movie making, creates jobs and promotes the country by bringing famous directors and actors.

Over the last twenty years, during which Patrick Sandrin has been shuttling between the capitals of France and Bulgaria, Sofilm has offered complete production services in Bulgaria for more than forty films, TV movies, music videos and commercials.

Catherine Deneuve, Luc Besson, Christophe Lambert. All they have been brought to Bulgaria by the charming French movie producer with a great flair for doing business. Sandrin arrived for the first time in Bulgaria in 1989. After having been on the board of the CNC (National Center of Cinematography), he was a board member for the fund ECO for two years. The goal was to support Eastern European cinematographers' co-productions with French production companies at times when the countries were facing a growing economic crisis. There were three Bulgarian films among those considered by the commission and that was how he started his work in Bulgaria.

Bulgaria brought the temptation of filmmakers to flee from high-priced locations to a whole new level. Meanwhile, its entry into the European Union in January 2007 made it easier for Western businesses to set up shop here.

But with Sandrin, it was not all about low costs and well-educated work force, traditionally the most often cited competitive advantages that Bulgaria offers as an outsourcing destination. Bulgaria cast spell on him in more than one way and the links that he draws between Bulgaria and France are numerous too. The fact that he initiated panorama of Bulgarian cinema in France and turned it into a very successful project speaks for itself.

"France is a country of booming development, urban pressure, fast pace and severe competition, which one could even call an economic war. Bulgaria, on the other hand, is a country between two worlds - the nature and the modern world waiting on its threshold. I discovered here unknown to me closeness to nature, tranquility and peacefulness, which to my mind, are born out of the hardships that the people have gone through." The cinema is closely connected with all channels of communication and the media. A small industrial niche, which, because of its huge media potential, brings lots of information about the country, in our case, Bulgaria. The more films are shot in Bulgaria, the more intensive its communication with other countries will be," says Sandrin.

The famous directors and actors that Sofilm has brought to Bulgaria are media celebrities and what they say has huge resonance abroad. This adds a different, more positive flavor to the common talk about Bulgaria, because it is represented by its greatest assets - its geography, people and culture.

Patrick Sandrin can pride himself of making a tremendous contribution to promoting Bulgaria's potential as a shooting site for foreign movie productions.

The shooting of "Vatanen's Hare", featuring Christophe Lambert, for instance, inspired interest in Bulgaria around the world and France in particular.

In the picaresque movie, a journalist called Vatanen (Lambert) finds a wounded hare when on assignment with a photographer. This small incident becomes a life-changing experience for Vatanen as he decides to break free from the world's constraints, sell his possessions and live in the woods together with his newfound friend. Vatanen and the hare observe human existence as just that, "existing", rather than "living".

It all ads up It is a small wonder that the French producer picked namely Bulgaria for shooting films, which offer an escape from the vanity of the modern world. The natural scenery is exceptional, while the conditions for set construction are even better, one of Sofilm greatest strengths.

The country is rich in surprisingly exotic landscape and competent technical staff, whose designs can do wonders to mimic the architectural style and layout of the original script location.

The biggest challenge that Bulgaria faces now however is to continue training its people well and up to the highest standards. Design, photography, advertising, cinema and communications are developing at a very fast pace and Bulgaria faces the risk of lagging behind in terms of training.

Training and set constructions are crucial for shooting capricious advertisements. Unlike Prague, Argentina and South Africa, which are the best known hotspots for that activities, Bulgaria is still a virgin soil, but is already proving fertile.

The French producer says this is not a bad thing as the shooting of movies is distributed among the countries, each of them specializing in a different "species". Bulgarian film-lovers, novices and experts alike, will be quick to tell you the open classes, organized by Patrick Sandrin, are among the highlights in their program each year. These are those rare for Bulgaria events, where they have the opportunity to participate in an open cinema workshop, exploring the nature and best examples of film categories and a lot more.

A project of Executive Production Sofilm Patrick Sandrin and the Bulgarian National Television, the open classes allow lecturers and participants to treat themselves to an exciting and eclectic mixture of movie-making, anthropology, sociology, philosophy, economics and literature.