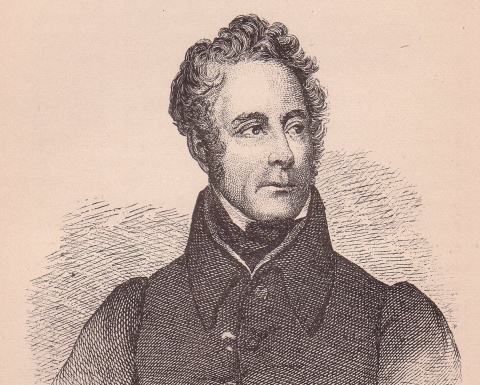 Among the most prominent examples are the French language high school in Bulgaria's capital Sofia, which bears Lamartine's name, the so-called "Lamartine House" in the city of Plovdiv, as well as the Lamartine monument in the small town of Vetren.

In 1832-3, the leading figure of French Romanticism and future key politician of the Second Republic, undertook a trip to the Middle East, returning through what was then called "the Near East," the Balkans.

In 1835 he published, under the title Voyage en Orient, an account of his journey that ranks among the top works of French travel prose. For Bulgarians, this piece of literature came to bear political significance, too.

It is perhaps interesting to note that just about a dozen pages from the hundreds that make up the book are devoted to Lamartine's brief sojourn through Bulgaria.

This is understandable, as the poet visited places such as Syria and Lebanon, the great cities of Jerusalem and Constantinople, and, among other things, had to live through the death of his young daughter Julia, who perished in Beirut.

However, even though it was comparatively little, what Lamartine had to say of Bulgaria and Bulgarians was warm, friendly and understanding.

Thus, perhaps unwittingly, he became one of a number of cherished Western figures who Bulgarians saw as expressing sympathies with their nation, which at the time was hard bent on gaining independence from a 450-year-long rule by the Ottoman Empire.

Lamartine crossed Bulgaria in July 1833, on his way from Constantinople through Edirne, Plovdiv, Sofia and on to Nis and Western Europe. His trip through Bulgaria was however set back by a acute illness he suffered. This unhappy event allowed Lamartine to learn more about the open and friendly character of local Bulgarians, Greeks – and Ottoman dignitaries.

Upon leaving Edirne (Greek: Adrianopoli; Bulgarian: Odrin), Lamartine crossed the Rhodope Mountains, which he noted for their lively forested gorges and "pretty villages."

In Plovdiv, then Philippopoli, he was warmly welcomed in the house of young Greek merchant Georgios Maurides. The house is still standing in the old town of Plovdiv, a memorial plaque telling about Lamartine's visit. Now more popular under the name "Lamartine's House," it is managed by the Union of Bulgarian Writers.

Lamartine praised the view from the house's court as "one of the most admirable viewpoints in the world," with the panorama it gave over what he saw as a green, well-kept and marvelously situated Philippopoli. An interesting note is that according to the traveler's data, Plovdiv had then a population of 30,000, divided about evenly between Greeks, Armenians and Turks.

After a couple of days basking in the hospitality of Maurides, and getting to know other Greeks about town, Lamartine went on to Sofia, first stopping in Pazardzhik, where he was greeted by the sumptuous hospitality of the local Ottoman bey.

Upon leaving Pazardzhik – which he also described as a "beautiful city" – he turned up in the "miserable village" Yenikoy, now the town of Vetren. The area, Lamartine says, was very well cultivated, but the village itself was poor and consisted of low, one-room clay houses.

It was then that Lamartine caught the acute fever and "inflammation of the blood." For some days he was not far from the troubling thought that he would perish stranded in a remote village in the middle of nowhere. He even instructed a member of his traveling party to bury him under a tree that fascinated him on the way to Vetren, with only the word "God" on the tombstone.

However, this fortunately did not come to pass, and, taken care of by the local villagers, who supplied him with leeches, among other things, Lamartine started to convalesce. The bey at Pazardzhik and Maurides in Plovdiv heard about his illness and sent doctors and refreshments, but by then the poet was much better.

Lamartine spent three weeks in Vetren, an experience also commemorated with a monument on the main square of the town.

What were the Frenchman's remarks about Bulgaria and Bulgarians?

He really liked the picturesque, and as he saw it, well-cultivated country. Bulgarians to him were honest, hardworking, open folk, not much different from peasants he met in Western Europe.

"I could study there, in the very heart of the families, the mores of the Bulgarians: those are the mores of our Swiss or Savoyard peasants: the people are simple, nice, hardworking, full of respect for their priests and devotion for their religion. ... Their costume is similar to that of peasants in Germany; the women and girls have a costume similar to the one in the mountains of Switzerland; they are beautiful, lively and graceful."

Even traditional dances, Lamartine says, were not unlike the ones in France. Apparently the little-known "Near Eastern" Bulgarian people had an unmistakeably European profile.

The traveler observed that the Bulgarian population then lived in large villages or small towns and was predominantly agricultural. From what he saw and heard, they lived in peace and according to their own traditions, apart from the taxes they had to pay to authorities and the occasional outbursts of unrest.

Lamartine recounts that Bulgarians however hated the Turkish rule and were ready and boiling for independence.

Further, although with few words, the leading French public figure gave his resolute support for the independence of Bulgarians and Serbians, who according to him were destined to build new nation-states on the Balkans.

This was an important statement, as traditionally good relations between France and the Ottoman Empire meant that France was not always supportive of the independence struggles of Balkan peoples, especially Bulgarians.

At any rate, even though Lamartine at first was not thrilled with the village of Yenikoy, and then had to go through the ordeal of his grave illness, then came to love the place after getting to know its inhabitants.

After some mountain crossings, the traveler arrived in contemporary Bulgarian capital Sofia, which at the time, was according to him "nothing remarkable." He did not linger and went on to Nis and Serbia.

Much has changed since Lamartine travelled through Bulgaria some 180 years ago. Sofia has grown into a large city; the countryside is not all that well cultivated... Bulgaria and France have marked decades of warm relations and are partners in the European Union.

Nevertheless, in 1833 Lamartine made a nice remark on the political and economic situation in Bulgaria, which might be not all that irrelevant now, even though the administration is no longer Ottoman:

"The country in which Bulgarians live would soon become a delightful garden if the blind and stupid oppression, not of the government, but of the administration, let them cultivate it with a little more security."