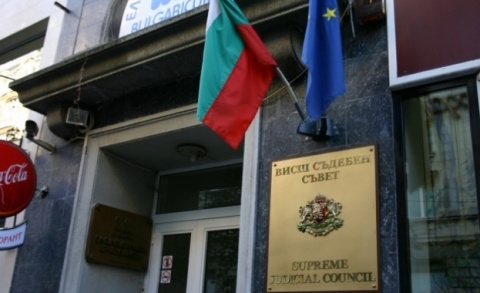 The VSS decision to dismiss a senior judge provoked an avalanche of political statements, and media comments, while Bulgarian judges staged an unprecedented protest rally. Photo by BGNES

Bulgaria's embattled Supreme Judicial Council, VSS, is preparing a "black list of all magistrates who have delayed their cases "for an unreasonably-long period of time."

The list must be prepared ASAP, before the Wednesday release of the European Commission's Monitoring Report on Bulgaria's Justice System and Internal Affairs under the Cooperation and Verification Mechanism.

VSS will use the list to name the magistrates who are "guilty" for the expected harsh criticism in the forthcoming report, but it has also emerged that the Council completely lacks any statistics of how many in the justice system have ever been sanctioned.

Meanwhile, Bulgarian lawyers are warning that the open session of VSS where the dismissal of Judge Miroslava Todorova, is going to be discussed is in violation of the law.

They cite articles 313, paragraph 3 from the Judiciary Power Act, which bans the dissemination of facts and information from disciplinary proceedings before the sanction becomes effective.

Over the weekend, Bulgaria's Justice Minister Diana Kovacheva, announced she was calling Monday an emergency meeting of the Supreme Judicial Council. The only item on the agenda includes reexamination of the VSS policy on disciplining judges who had delayed Court cases.

The Minister stresses that this practice must be consistent and with clear criteria all while making a personal commitment to work on such rules if it would emerge that they are non-existent.

Without a hearing, VSS dismissed last Thursday Miroslava Todorova, Chair of the Bulgarian Judges Association, BJA, and Judge at the Sofia City Court on disciplinary grounds over the unreasonable delay of proceedings. The move came just days ahead of the release of the European Commission's report.

Kovacheva says VSS must make the grounds for their decision public and offer information on the exact violations committed by the Judge.

Kovacheva, who at first cautiously sided with the decision, hardened her stance and also criticized VSS, saying they should apply the same standards to all and reexamine their decision.

The Bulgarian Standard daily writes, citing unnamed sources that some VSS members held a secret meeting Sunday to discuss plans to come out of the situation – let Todorova appeal the ousting before the Supreme Administrative Court or revoke their decision.