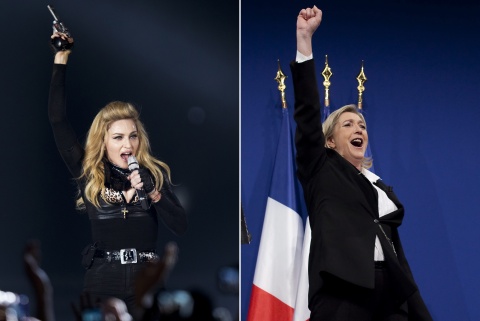 Combo of showing US singer Madonna performing in Cologne, Germany, 10 July 2012, and French far-right leader Marine Le Pen during the first round of the French presidential elections, in Paris, France, 22 April 2012. EPA/BGNES

French far right party National Front has announced it will sue pop icon Madona for showing FN leader Marine Le Pen with a swastika at a video during her concert in Paris.

Saturday night Madonna performed at Paris's Stade de France, and during the song "Nobody Knows Me", she screened images of Le Pen with a swastika superimposed on her forhead.

"We cannot accept such a detestable comparison," stated National Front top functionary Florian Phillipot, saying the party will table its legal claim against Madonna during the coming week.

France's leading far right party had already threatened to sue Madonna, after she showed similar images of Marine Le Pen with a swastika during her Tel Aviv show in May, part of her World Tour 2012.