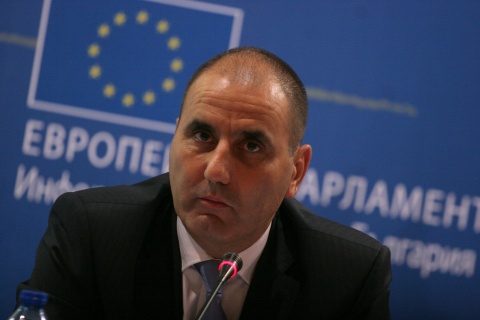 Interior Minister Tsvetan Tsvetanov has insisted that the dismissal of Judge Miroslava Todorova was not triggered by him or by any political figure. Photo by BGNES

Bulgarian Interior Minister Tsvetan Tsvetanov has rejected accusations of personal and political involvement into the work of the Supreme Judicial Council (VSS).

Tsvetanov spoke Friday in Parliament to respond to accusations of the opposition of undue political influence on the judiciary in relation to the dismissal of Judge Miroslava Todorova over delayed proceedings by the VSS.

The harsh disciplinary penalty imposed on Todorova triggered an unprecedented protest on Friday morning by Sofia-based magistrates and representatives of NGOs.

Bulgarian right-wing parties and the ethnic Turkish Movement for Rights and Freedoms (DPS) hinted Friday that the Interior Minister had ordered the dismissal.

Rightist leader Ivan Kostov dismissed Prime Minister Boyko Borisov's claims that the scandal had been triggered by the VSS, suggesting that Borisov and Tsvetanov had been the ones who committed the sabotage.

Kostov cautioned that the provocations staged by center-right ruling party GERB would deal a devastating blow to the independence of the judiciary and would further erode Bulgaria's image abroad.

He said that Borisov and Tsvetanov were aiming to shift their responsibility for the sorry state of Bulgaria's judiciary onto the outgoing and "deeply compromised" VSS panel and to instill fear into magistrates to get them to appoint convenient members of the next VSS.

Kostov insisted that Tsvetanov was ordering the removal of bothersome magistrates to replace them with obedient ones and with friends.

The rightist leader added that the Blue Coalition was not claiming that Judge Todorova was innocent because the issue was beyond the party's competence.

The Interior Minister responded by saying that his influence was far weaker than suggested.

He argued that he had simply been defending his civic stance in a bid to return people's trust in politicians and institutions.

Tsvetanov stressed yet again that the current VSS members had been appointed by the previous Parliament.

He used the opportunity to reiterate his criticism against Todorova, stating that the delays she admitted had come in total disregard of the principle of rule of law and had deprived people of justice.

Tsvetanov said that he was at loss about what to say to the victims of the crimes that had gone unpunished due to Todorova's delays.

The Interior Minister added that the rightist leader and former Prime Minister was in no position to criticize because he had been exerting overt political pressure on the judiciary for 20 years.

Todorova's dismissal is widely believed to have been triggered by her criticism of the Supreme Judicial Council and the libel suit she filed against Interior Minister Tsvetan Tsvetanov.

Tsvetanov has firmly rejected having a personal conflict with the judge.