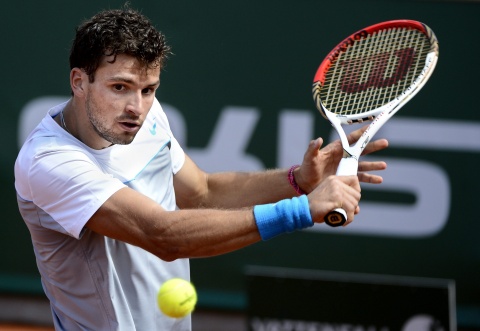 Grigor Dimitrov of Bulgaria returns a shot during his match against Frederico Gil of Portugal during the Skistar Swedish Open tennis tournament in Bastad, Sweden, 12 July 2012. Photo by BGNES

"I am sick and tired of comparisons between my game and Roger Federer's. I have not won a single ATP event and I have reached only number 69 in the world ranking," the Bulgarian shared in an honest interview for the Swedish site tennissverige.se.

On Thursday, Dimitrov, world number 69, moved to the last eight, after defeating Portugal's Frederico Gil in straight sets 6-3, 6-4 in the second round of the SkiStar Swedish Open on Bastad, Sweden.

It took the Bulgarian just an hour and 21 minutes to beat Frederico in an easy match.

Dimitrov is drawn to play the third seed, Albert Ramos of Spain, in the quarter-finals.

"The atmosphere here is fantastic. People are so relaxed and not worring about anything. In terms of tennis I hope to show the best," the Bulgarian said.

"I think I have been playing pretty good tennis recently. I felt pretty good at Wimbledon, but unfortunately had to quit over health concerns. This is really a pity, but I hope I will manage to finish the season with good performances."

For 21-year-old pointed out that the transition between junior and professional tennis is difficult and requires time and patience:

"It takes time to understand the game of professional tennis players and know them personally. One should learn how to feel at home at ATP tournaments and learn how to prepare best for them. It's all about experience and personal growth."