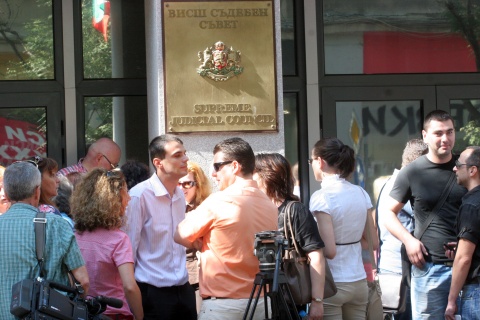 Bulgarian judges staged Friday an unprecedented for the judiciary protest rally against the dismissal of Miroslava Todorova, Chair of the Bulgarian Judges Association, BJA, and Judge at the Sofia City Court.

Over 100 judges gathered on the street, in front of the headquarters of the Supreme Judicial Council, VSS, in downtown Sofia, in a first such demonstration in Bulgarian history. Scores of representatives of 11 NGOs, lawyers, and Bulgarian citizens also showed up in sigh of support.

Todorova was dismissed Thursday by the Supreme Judicial Council (VSS) on disciplinary grounds over the unreasonable delay of proceedings.

The demonstrators held one single slogan reading: "VSS - the Supreme Council of the Brownnosers!"

A few hours after the Thursday announcement of the disciplinary penalty, judges from the Sofia City Court, the Sofia Regional Court, the Sofia Appellate Court and the Supreme Court of Cassations distributed a statement urging their colleagues from all over the country to postpone the hearings scheduled for Friday to attend the rally in support of Todorva.

Those from other cities and towns have also taken leave in order to attend.

The protest was organized on Facebook - "Protest against the attempts of VSS to self-administer justice against Judge Todorova."

Right after the news about Todorova's dismissal was announced, young judges from the courts in Vratsa, Vidin, Smolyan, Svishtov, Gabrovo, Silistra, Lovech and Lukovit also came up with a statement of support.

The magistrates from the Sofia City Court, the Sofia Regional Court, the Sofia Appellate Court and the Supreme Court of Cassations further say they will submit with VSS a request to its members to withdraw their decision or to resign.

The NGOs supporting the rally have issued a declaration labeling the dismissal "an unprecedented act," done behind closed doors and without a hearing of Todorova.

Bulgarian Prime Minister, Boyko Borisov, called the dismissal a pure provocation, coming just days before the European Commission is to publish the Monitoring Report on Bulgaria's Justice System and Internal Affairs under the Cooperation and Verification Mechanism.

Also on Friday, the opposition voiced in the Parliament support for the judge and the demonstrators. Ivan Kostov, Chairman of the right-wing Democrats for Strong Bulgaria, DSB, said VSS executed a political order, all while applying double standards.

He gave as an example the Head of the Sofia City Court, Vladimira Yaneva, a self-admitted friend of Tsvetanov, who has received only a reprimand for 43 similar violations - delaying cases.

The right wing stressed they were not pleading that Todorova is flawless because it was outside their competence.

Todorova, who was bestowed earlier the 2011 Human of the Year Award, is expected to give a press conference Friday.