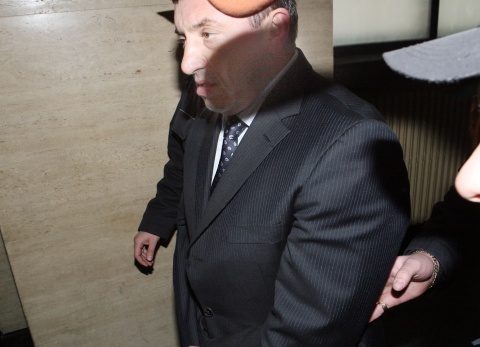 Alexey Petrov, a former employee of the State Agency for National Security, DANS, murky businessman and alleged crime boss, insists that the case against him is political retribution. Photo by BGNES

Bulgaria's high-profile criminal case, codenamed "Octopus" was postponed once again Thursday over the sudden illness of Rumyana Chenalova, the judge presiding over the case.

The magistrates were scheduled to examine the detention measure of Petrov, who is currently behind bars.

It remains unclear when the next session will be rescheduled.

Upon leaving the courtroom, the defendant stated that he expected everything possible to happen to him, including being killed. He has already complained about an attack of his life when armed gunmen have stormed his home in the mountain town of Teteven.

Also on Thursday, the defense council announced they were now referring the case to the Human Rights Court in Strasburg.

On June 20, the lawyers requested from the Sofia City Court to release their client from arrest, after presenting 4 new witnesses.

All four took the witness stand to give accounts fully contradicting the one of another witness in the case – Plamen Ustinov.

After hearing the new testimony, the magistrates decided to postpone their decision by another 3 weeks. The Court also assigned a medical expertise to find out if the health condition the former DANS employee allows a prison stay.

Petrov, who has been tried in the complicated high-profile 'Octopus' case for organized crime, was rearrested at the beginning of May after two witnesses said he pressured them to change their testimonials.

He was first detained in February 2010 and spent what he claims to have been 9 months of abuse in jail, during which his health allegedly deteriorated.

Petrov AKA The Tractor and The Octopus, a former employee of the State Agency for National Security, DANS, murky businessman and alleged crime boss, together with five other people, is facing charges of racketeering and extortion.

At the beginning of May, key witness, Plamen Ustinov, former employee of Bulgaria's National Security Services, NSO, testified in Court that he came across the defendant in Teteven three days ago and the later attempted to convince him to scrap his testimony. He further explained that this had been the third such meeting between them while various individuals had been coming to him ever since the arrest to offer him money to give up on appearing on the witness stand.

These claims of pressure on the witness led to the magistrates' decision to send Petrov in jail again.

The Tractor, on his part, claims that Ustinov was involved in the attack in Teteven. He told the magistrates that in the summer of 2010, Ustinov went to his office and handed him a declaration he has written how the Chief Secretary of the Interior, Commissar Kalin Georgiev, the Chief of the Main Directorate for Combatting Organized Crime, GDBOP, Stanimir Florov, and the Deputy Sofia City Prosecutor, Roman Vasilev, to testify against Petrov.

At this point Ustinov had demanded from The Tractor a "huge" amount of money to not give the implicating account. After receiving a negative answer, Ustinov went to GDBOP to offer his services in testifying against the defendant.

Petrov was released on house arrest in October 2010, which in February 2011 was changed to own recognizance. He ran for President in the end-October elections.

He continues to insist that the case against him is political retribution. He has vowed to sue for libel all who testify against him, stressing that this case will end up being a serious blow to national security and a humiliation for Bulgaria. In his words the cabinet and personally Prime Minister, Boyko Borisov, are racketeering him.

He further denies pressuring any witness.