Bulgarian FinMin Reacts to Euro as Fox to Grapes 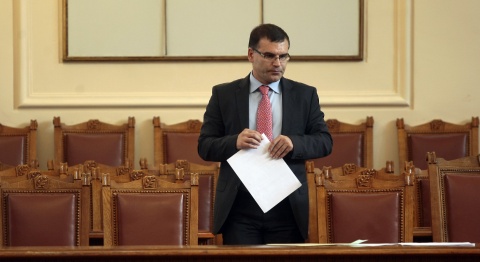 A worried Djankov is shown at the ministers' seats in the plenary hall of the Bulgarian Parliament. Photo by BGNES

Bulgarian Minister of Finance Simeon Djankov has significantly cooled his enthusiasm about Bulgaria's joining the eurozone, saying there is no need to hurry.

"We are not entering in the eurozone 'waiting-room', for we have no benefit to do so," stated Djankov after Wednesday's sitting of the Bulgarian cabinet.

"We have no interest in hurrying. We have only potential negatives in store. That's why we'll wait for things to cool down," added he.

Joining the eurozone was one of the top priorites for the GERB cabinet, to which Djankov is deputy-PM, when came to power in the summer of 2009.

"Since 2009, bad things happened in the eurozone which have changed the situation," explained Bulgaria's Minister of Finance.

Wednesday analysts from the Center for Liberal Strategies also issued a position stating that in the current financial situation, it is not benefitial for Bulgaria to enter the eurozone.

Two weeks ago, Bulgarian PM Boyko Borisov alleged that the country has fulfilled the Maastricht criteria for joining the euro, only to be refuted by the European Central Bank.