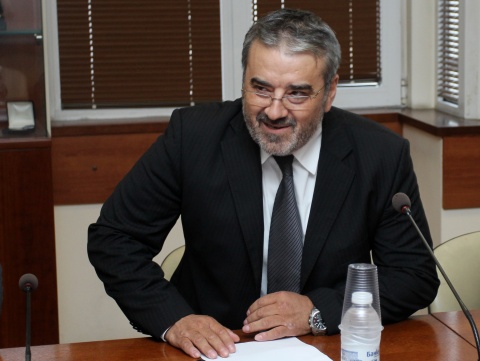 DKEVR Chair Angel Semerdzhiev has explained that Bulgaria is quite ahead of schedule as regards the launch of renewable energy capacities. Photo by BGNES

Angel Semrdzhiev, Chair of the State Commission for Energy and Water Regulation (DKEVR), has explained that Bulgaria is ahead of schedule for launching renewable energy capacities, which requires steps to limit investor interest in the sector.

In a Tuesday interview, Semerdzhiev announced that Bulgaria had 1500 MW of installed capacity of renewable energy projects.

He noted that the annual production of these plants equaled the output of the AES Galabovo TPP (formerly Bulgaria's state-owned Maritsa Iztok 1 TPP), which had 600 MW of installed capacity, due to the fact that the TPP remained operational for a longer total period.

Semrdzhiev sided with the proposal of Energy and Economy Minister Delyan Dobrev that the preferential tariffs for photovoltaic plants with an installed capacity of over 30 KW had to be removed.

The DKEVR Chair further backed the idea for the creation of a parliamentary committee tasked with monitoring the work of the watchdog.

"This is a step in the right direction because it will enable MPs to see the results of the laws they adopted which envisage preferential treatment in certain cases," the DKEVR Chair emphasized.

Semerdzhiev has come under severe public criticism due to the latest price increases approved by the regulatory body.

On July 1, electricity prices in Bulgaria went up by an average 13%, gas prices increased by 4.88% and water tariffs in Sofia went up by 5%.

Semerdzhiev has claimed that the electricity price hike can be attributed mainly to the increased production of renewable energy.