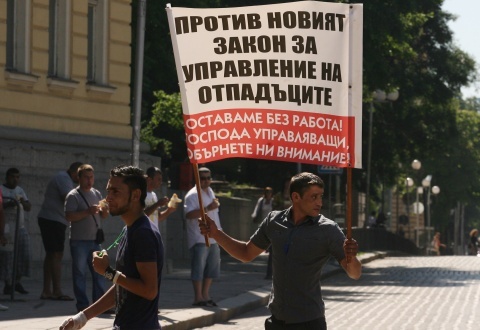 Representatives of scrap metal dealers and recycling companies claim that the new law will force many companies dealing with metal scrap to cease their activities. Photo by Sofia Photo Agency

Nearly half of all 2300 scrap metal yards in Bulgaria have been forced to shut down over the last year in the wake of controversial and restrictive new legislation, people from the sector have alarmed.

The waste management act was finally passed at second reading by the Bulgarian Parliament at the end of June after nearly year-long debates.

Bulgaria's environment ministry drew up the controversial bill on waste management, claiming it is ramping up efforts to tackle metal theft.

The bill triggered the anger of local companies, dealing with scrap metals, who say it aims to monopolize the sector by forcing many SMEs to fall by the wayside.

People from the sector say the new requirements will force 2000 out of all 2400 scrap metal yards in Bulgaria to cease their activities.

Traders in ferrous and nonferrous metals, which are still operating, face the prospect of being stripped of their licenses and forced to apply for permits.

The law also obliges municipalities to build their own scrap yards up to two years after it comes into force, where Bulgarian citizens will be obliged to deposit their scrap for free.

The Bulgarian Association of Recycling, which has been one of the most vocal opponents against the act, says it serves lobbyist interests and puts at stake the future of the people and the whole sector, which continues to be one of the most profitable for Bulgaria's economy despite the global economic crisis.

"Its real aim is to radically redraw the scrap metal market and give the lion share to a few big companies and organizations to the detriment of hundreds of small scrap yards, which have been operating for more than ten years," according to the head of the association Vladimir Dimitrov.

Traders in ferrous and non-ferrous metals say they are determined to approach with their complaints the president, the Constitutional Court and the five directorates in the European Commission.